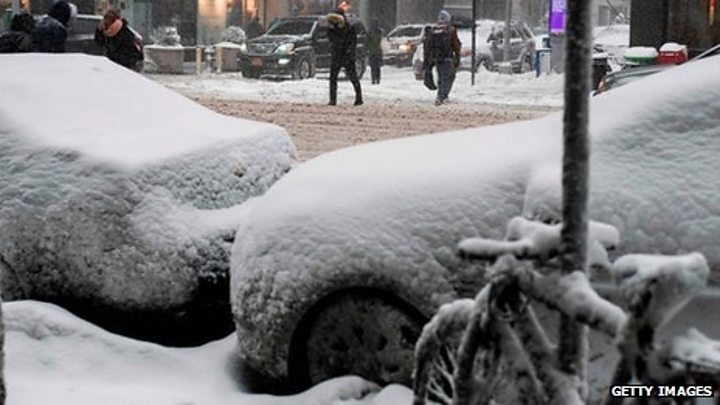 North-eastern parts of the US are bracing for record-breaking cold weather as the deadly "bomb cyclone" is set to continue into the weekend.

Efforts are under way in New England to clear roads of ice and snow with temperatures expected to plunge below -20F (-29C), according to the National Weather Service (NWS).

The storm has so far been blamed for up to 19 deaths, US media report.

Deaths were recorded in North Carolina, Wisconsin, Kentucky and Texas as a result of traffic accidents and exposure to the bitterly cold temperatures, CBS news reports.

Utilities companies in eastern North America are advising residents to leave their homes and seek shelter elsewhere if they experience problems heating their properties.

The National Grid also warned customers on Twitter not to attempt to clear snow and ice from gas meters and vents using "sharp objects" and to avoid operating generators indoors.

Nearly 4,000 US flights were cancelled on Thursday as snow blanketed parts of the north-eastern US seaboard.

Some ferry services also had to be halted along the Canadian coast.

The "bomb cyclone" is continuing to bring snowfall, with Boston expected to receive up to 18in (45cm).

Temperatures are forecast to fall as frigid air lingering over the North Pole heads towards the US mid-Atlantic region.

Nearly 60 million people are in the path of the storm, with weather warnings in effect from Maine to parts of Georgia.

The NWS said: "In addition to heavy snowfall rates, the intensifying storm will result in strengthening winds, producing blizzard conditions for coastal regions of New England."

In Boston, weather officials say the tide may reach its highest recorded level since 1921.

Hurricane-force winds of up to 60mph (95km/h) are predicted to hammer the north-eastern US coastline.

US railway operator Amtrak is running on a reduced schedule and interstate buses are also being cancelled.

The weather pattern has already brought snow to the US South as far down as Florida, where the cold snap has caused some iguanas to freeze and fall from trees.

The storm is forecast to undergo rapid cyclogenesis over the Atlantic Ocean throughout Thursday and into the weekend, and current projections show areas north of New York as having the highest risk of significant impacts from strong winds and heavy snow.