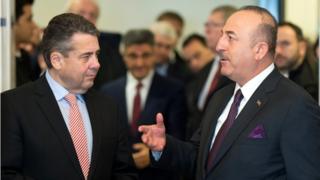 Germany's foreign minister has held talks with his Turkish counterpart in a bid to "overcome difficulties" and improve relations between the nations.

Sigmar Gabriel said "open talks" with Mevlut Cavusoglu were "held in mutual respect" despite their differences.

Relations between the Nato allies and trade partners deteriorated after the failed coup in Turkey in 2016.

On Saturday Mr Gabriel, who hosted Mr Cavusoglu at his home in the central German city of Goslar, said the two had "given ourselves the task to do everything to overcome the difficulties in German-Turkish relations".

The pair acknowledged their differences, including Germany's opposition to Turkey gaining membership of the European Union. Germany is also seeking the release of journalist Deniz Yucel, held in a Turkish jail without charge for 10 months.

Mr Gabriel said after the talks that it was "time to find more common ground in the future by remembering everything that binds us together". Germany is Turkey's biggest export market and has the world's largest Turkish diaspora.

What started the spat?

Turkey's relations with its European partners have been frosty for some time, and with Germany in particular. Relations began to decline in March 2016 after President Erdogan filed a criminal complaint against a German TV comic over an obscene poem about the Turkish leader.

But relations worsened after the failed coup in Turkey against Mr Erdogan in July 2016 in which more than 250 people died.

The subsequent crackdown has seen some 50,000 people arrested and another 150,000 either suspended from their jobs or sacked.

Turkey has since accused its European partners in Nato of harbouring coup plotters, prompting Germany and France to complain about the purge.

In 2017 President Erdogan lashed out at Germany after the Berlin government refused to let some of his allies campaign for him there before a controversial referendum on increasing his powers.

Mr Gabriel had at the time accused Mr Erdogan of an "unprecedented" act of interference in German sovereignty. A majority of Germany's ethnic Turkish voters backed Mr Erdogan in the April 2017 vote.

When President Erdogan led the diplomatic offensive in Paris on Friday, it was clear that differences remained.

President Macron told him it was time to drop the pretence that there could be any progress towards Turkey joining the European Union as things stood, detailing concerns over human rights since the failed coup.

Mr Erdogan said that Turkey was tired of constantly imploring to join the EU and then lashed out at a journalist who asked about claims that the country sent arms to Syria.

The journalist had asked him about a 2015 newspaper report that Turkish intelligence had sent the supplies.

Mr Erdogan responded by accusing the journalist of talking like a member of the Gulenist movement, which he blames for the botched coup.