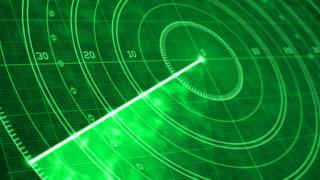 How the search for a 'death ray' led to radar

You can trace the extent of our reliance on air travel to many inventions. The jet engine, perhaps, or the aeroplane itself.

But sometimes inventions need other inventions to unlock their full potential.

For the aviation industry, that story starts with the invention of the death ray, or at least an attempt to design a death ray, back in 1935.

Officials in the British Air Ministry were worried about falling behind Nazi Germany in the technological arms race.

The death ray idea intrigued them: they had been offering a £1,000 prize for anyone who could zap a sheep at a hundred paces. So far, nobody had claimed it.

But should they fund more active research? Was a death ray even possible?

Unofficially, they sounded out Robert Watson Watt, of the Radio Research Station.

And he posed an abstract maths question to his colleague Skip Wilkins.

"Suppose, just suppose," said Watson Watt to Wilkins, "that you had eight pints of water, 1km [3,000ft] above the ground.

"How much radio frequency power would you require, from a distance of 5km?"

Skip Wilkins was no fool.

He knew that eight pints was the amount of blood in an adult human, 98F was normal body temperature and 105F was warm enough to kill you, or at least make you pass out, which – if you're behind the controls of an aeroplane – amounts to much the same thing.

So Wilkins and Watson Watt understood each other, and they quickly agreed the death ray was hopeless: it would take too much power.

But they also saw an opportunity.

Clearly, the ministry had some cash to spend on research. Perhaps Watson Watt and Wilkins could propose some alternative way for them to spend it?

Wilkins pondered. It might be possible, he suggested, to transmit radio waves and detect – from the echoes – the location of oncoming aircraft long before they could be seen.

Watson Watt dashed off a memo to the Air Ministry's newly formed Committee for the Scientific Survey of Air Defence. Would they be interested in pursuing such an idea? They would indeed.

What Skip Wilkins was describing became known as radar.

50 Things That Made the Modern Economy highlights the inventions, ideas and innovations that helped create the economic world.

It is broadcast on the BBC World Service. You can find more information about the programme's sources and listen online or subscribe to the programme podcast.

As Robert Buderi describes in his book The Invention That Changed the World, the Germans, the Japanese and the Americans all independently started work on it too.

But by 1940, it was the British who had made a spectacular breakthrough: the resonant cavity magnetron, a radar transmitter far more powerful than its predecessors.

Pounded by Nazi bombers, Britain's factories would struggle to put the device into production. But America's factories could.

For months, British leaders plotted to use the magnetron as a bargaining chip for American secrets in other fields.

Britain would simply tell the Americans what they had, and ask for help.

So in August 1940, a Welsh physicist named Eddie Bowen endured a nerve-racking journey with a black metal chest containing a dozen prototype magnetrons.

First, he took a black cab across London: the cabbie refused to let the clunky metal chest inside, so Bowen had to hope it wouldn't fall off the roof rack.

Then, he took a long train ride to Liverpool, sharing a compartment with a mysterious, sharply dressed, military-looking man who spent the entire journey ignoring the young scientist and silently reading a newspaper.

Then, he took a ship across the Atlantic. What if it were hit by a German U-boat? The Nazis couldn't be allowed to recover the magnetrons; two holes were drilled in the crate to make sure it would sink if the boat did. But the boat didn't.

The magnetron stunned the Americans. Their research was years off the pace.

President Roosevelt approved funds for a new laboratory at Massachusetts Institute of Technology (MIT) – uniquely, for the American War effort, administered not by the military but a civilian agency.

Industry got involved: the very best American academics were headhunted to join Bowen and his British colleagues.

By any measure, MIT's Radiation Laboratory – known as the Rad Lab – was a resounding success. It spawned 10 Nobel laureates. The radar it developed, detecting planes and submarines, helped to win the War.

It seems obvious that civilian aviation would need radar too, given how quickly it was expanding.

In 1945, at the War's end, US domestic airlines carried seven million passengers. By 1955, this figure had risen to 38 million.

And the busier the skies, the more useful radar would be at preventing collisions.

But rollout was slow and patchy. Some airports installed it; many didn't.

In most airspace, planes weren't tracked at all. Pilots submitted their flight plans in advance, which should in theory ensure that no two planes were in the same place at the same time.

But avoiding collisions ultimately came down to a four-word protocol: "see and be seen".

On 30 June 1956, two passenger flights departed Los Angeles Airport, three minutes apart: one was bound for Kansas City, one for Chicago. Their planned flight paths intersected above the Grand Canyon, but at different heights.

Then thunderclouds developed. One plane's captain radioed to ask permission to fly above the storm. The air traffic controller cleared him to go to "1,000 on top" – 1,000ft above cloud cover. See and be seen.

Nobody knows for sure what happened: planes then had no "black box" flight recorders, and there were no survivors. At just before 10:31, air traffic control heard a garbled radio transmission: "Pull up! We are going in…"

From the pattern of the wreckage, strewn for miles across the canyon floor, the planes seem to have approached each other at a 25-degree angle, presumably through a cloud.

Investigators speculated that both pilots had been distracted by trying to find gaps in the clouds, so passengers could enjoy the scenery.

Accidents happen. The question is what risks we're willing to run for economic benefits.

Why did we use leaded petrol for so long?

How the smartphone became so smart

Battery bonanza: From frogs' legs to mobiles and electric cars

How economics killed the antibiotic dream

That question is becoming pertinent again with respect to crowded skies: many people have high hopes for unmanned aerial vehicles, or drones.

They're already being used for everything from film-making to crop-spraying.

Companies such as Amazon expect the skies of our cities soon to be buzzing with grocery deliveries.

Civil aviation authorities are grappling with what to approve. Drones have "sense-and-avoid" technology, and it's pretty good, but is it good enough?

The crash over the Grand Canyon certainly concentrated minds. If technology existed to prevent things like this, shouldn't we make more effort to use it?

Within two years, what's now known as the Federal Aviation Administration was born in the United States.

And American skies today are about 20 times busier still. The world's biggest airports now see planes taking off and landing at an average of nearly twice a minute.

Collisions are absurdly rare, no matter now cloudy the conditions.

That's thanks to many things, but it's largely thanks to radar.

Tim Harford writes the Financial Times's Undercover Economist column. 50 Things That Made the Modern Economy is broadcast on the BBC World Service. You can find more information about the programme's sources and listen online or subscribe to the programme podcast.