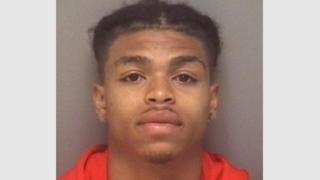 A black man who was beaten at a far-right rally in Virginia has turned himself in to be formally charged in connection with the incident.

DeAndre Harris, who is accused of unlawful wounding at the 12 August Charlottesville protest, was released on an unsecured bond.

Photos and video of Mr Harris, 20, being attacked by white men at the event were widely shared online.

Two alleged assailants were charged with malicious wounding in September.

But many are incredulous that an African-American set upon by white attackers at a far-right demonstration could himself face a criminal case.

Earlier in a parking garage in #Charlottesville – white supremacists beat this black kid w/poles. [Photo for by @zdroberts @NationofChange] pic.twitter.com/LLPBPjb8si

Another individual alleged that Mr Harris attacked him, prompting the arrest warrant to be issued on Tuesday.

Mr Harris's lawyer, S Lee Merritt, said his client did nothing wrong and authorities did not have probable cause to prosecute him.

The attorney said his client, a former special-education instruction assistant, suffered a concussion, a knee injury and a fractured wrist.

The assault also left him with a head laceration that required stitches.

"We find it highly offensive and upsetting," Mr Merritt told the Washington Post newspaper, "but what's more jarring is that he's been charged with the same crime as the men who attacked him."

Footage of the attack spread quickly on social media, showing at least five white men beating and kicking Mr Harris to the ground in an indoor car park next to the police station during the "Unite the Right" rally in Charlottesville.

Video of the incident appears to show a scuffle between the two in which Mr Harris swings a torch at a man identified by US media as Mr Crews, who lunges at him with the pole of a Confederate flag.

Mr Harris' attorney maintains the torch did not "make significant contact" with Mr Crews, who describes himself on Twitter as a "Southern Nationalist, Attorney".

In the US, alleged crime victims can go to a magistrate after filing police reports.

The magistrate only needs probable cause based on the alleged victim's testimony to grant an arrest warrant.

Mr Harris surrendered on Thursday a day after police charged a man identified as Jacob Scott Goodwin, 22, in connection with the car park brawl.

Police said Mr Goodwin, of Ward, Arkansas, could be seen on camera carrying a large plastic shield and kicking Mr Harris, who was on the ground.

Daniel Borden, 18, of Ohio, and Alex Michael Ramos, 33, of Georgia, were also charged with malicious wounding last month in connection with the attack.

Mr Harris was working as a full-time teacher's assistant in Charlottesville before the rally.

But his lawyer told US media his client had been unable to continue in the job because he now suffers fear-and-anxiety attacks in crowded public spaces.

A counter-protester, Heather Heyer, 32, was killed when a driver ploughed a car into a crowd.

White nationalist protesters returned to Charlottesville on 8 October for a brief, torch-lit rally.

The demonstrators gathered near the same statue of Confederate General Robert E Lee that was at the centre of the August deadly clashes.

The statue has since been covered up while a legal challenge to its removal is under way.