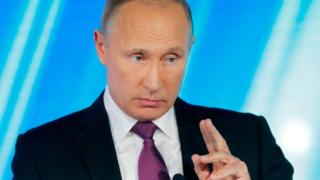 British MPs have asked Facebook if it has evidence of paid-for activity by accounts linked to Russia at the time of the Brexit referendum.

A letter addressed to Facebook's chief executive Mark Zuckerberg also asks about similar activity at the time of this year's general election.

It was written by Damian Collins, chairman of the Digital, Media and Sport Committee.

Facebook said it would respond to the request once it had been reviewed.

"Part of this inquiry will focus on the role of foreign actors abusing platforms such as yours to interfere in the political discourse of other nations," wrote Mr Collins.

He said he wanted to know whether Facebook could provide:

"We have received a letter from the Digital, Culture, Media and Sports Committee and will respond once we have had the opportunity to review the request," a spokeswoman for Facebook said.

The committee's inquiry – which was put on hold during the general election earlier this year – aims to explore the impact of fake news.

The closing date for submitting evidence is 7 November.

Russia has consistently denied interfering in the democratic processes of other countries.