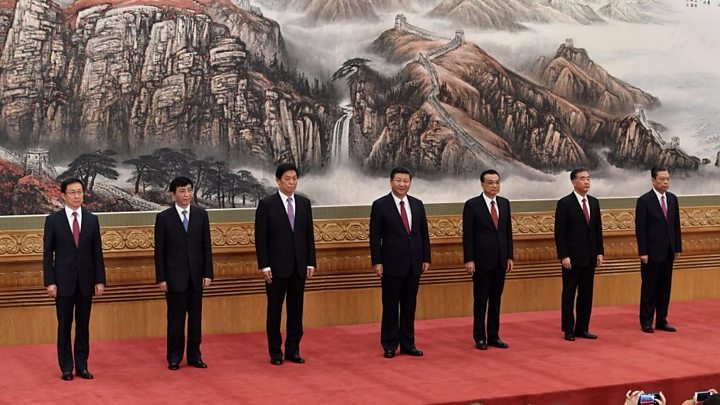 China has revealed its new senior leadership committee, breaking with tradition by not including a clear successor to President Xi Jinping.

The omission cements Mr Xi's grip on leadership for the next five years, a day after his name and his teachings were written into the constitution.

But it raises questions over whether Mr Xi, 64, intends to rule beyond 2022.

Why does the Politburo Standing Committee matter?

The committee is the top body of China's all-powerful Communist Party. Its role is to discuss and decide on major policy issues.

The party's constitution says China's top leader must also be a member of the standing committee. So appointments are keenly watched.

In the new line-up, Premier Li Keqiang, 62, is the only member to retain his position, apart from Mr Xi.

What kind of signal does the new line-up send?

Chinese leaders have traditionally hinted at possible heirs through committee reshuffles at the beginning of their final term.

There had been speculation that Mr Xi would elevate his protégé Chen Miner and Guangdong party secretary Hu Chunhua, both of whom are in their 50s – young enough to be credible successors.

But the fact that the new appointees were all in their 60s, and likely to retire at the end of this five-year term, sends a different signal.

The absence of any younger members will fuel speculation about Mr Xi's long-term intentions.

Could Xi break the 10-year rule?

The tradition emerged in the 1990s, when veteran leader Deng Xiaoping sought to avoid a repeat of the chaos that had marked the Mao era and its immediate aftermath.

Mr Xi's two predecessors have followed the orderly pattern of succession. But since he came to power in 2012, he has shown his readiness to write his own rules.

Even if he decided to stand down in 2022, his influence is now so great that he could continue to effectively rule the country.

Analysis: On the offensive

Breaking the mould on the succession, as with so much else, is part of the Chinese president's New Era, as he has termed it.

But don't imagine that now the Congress is over, you can forget about Mr Xi's New Era. In the clash of political civilisations, he has put China on the offensive.

In his speech to Congress, he set out a vision not just for the five years ahead but for 30, and talked of a socialist model which provides, "a new option for other countries and nations".

At home China is accelerating its ability to listen to every call and track every face, online posting, movement and purchase. Expect it now to export not just the governance model but the cyber weapons to make that work.

Even as the party unveiled its new leadership, it excluded major Western news organisations from the ceremony.

Officially no reason was given for barring the BBC, Financial Times, Economist, New York Times and Guardian, but unofficially journalists were told that their reporting was to blame – another sign of Xi's determination to control the message at home and abroad.

Mr Xi has assumed an unprecedented number of positions since coming to power in 2012, including the title of a "core" leader of China.

What is Xi 'thinking'?

The Thoughts of Chairman Xi