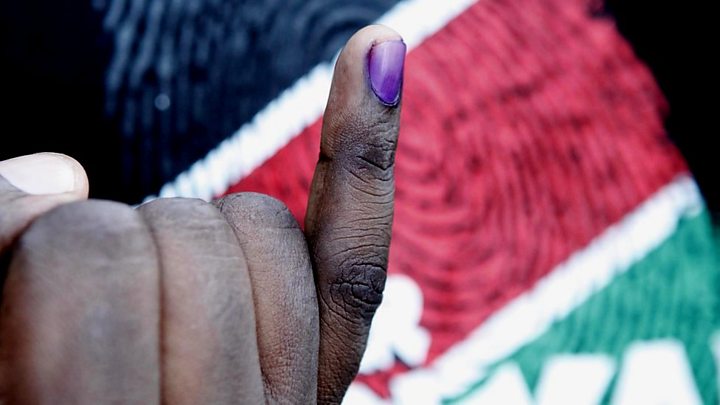 Kenya's presidential election re-run has been marred by isolated clashes and a boycott by the main opposition.

A teenage boy was shot by police and later died amid clashes in the opposition stronghold of Kisumu, one of four counties hit by violence.

The electoral commission said voting in those areas would be postponed until Saturday.

President Uhuru Kenyatta was declared the winner in an August vote, which was annulled because of "irregularities".

Tens of thousands of police and other security staff deployed to protect voters and polling stations, which closed at 17:00 local time (14:00 GMT).

The electoral commission has seven days to declare the results.

After casting his vote in the town of Gatundu, Mr Kenyatta had urged people to cast their ballots so the country could move on.

"We're tired as a country of electioneering. It's time we moved forward," he said, adding that most of the country was "calm and peaceful".

BBC's Emmanuel Igunza at the scene in Kisumu

Live rounds have been fired by police in the opposition stronghold of Kisumu, in western Kenya, killing at least one person.

Nineteen-year-old George Odhiambo was brought to the main hospital in Kisumu bleeding heavily from a thigh wound. His brother told me that they had been sitting outside their house watching opposition demonstrations when he was shot. Four other patients nursing gunshot wounds are all in a stable condition.

We've been coming across pockets of protesters as we drive around the city – with police firing teargas to disperse them. Most people here have heeded the boycott call by the opposition and stayed at home, and many polling stations have been barricaded to stop any would-be voters.

A voting official in Kisumu told me just three of 399 polling station officials had turned up, fearing they might face intimidation for taking part in the election. A lone but determined voter came to the main polling distribution centre this morning to find out how he could vote as his polling station was closed.

What effect are ethnicities having?

In parts of western Kenya where Mr Odinga's Luo community is mostly based, there is a near-100% boycott of the poll.

The electoral commission has postponed voting until Saturday in the western counties of Homa Bay, Kisumu, Migori and Siaya because of "security challenges". These areas are all likely to continue observing the opposition's boycott.

Some Kenyans may also feel Mr Odinga's withdrawal makes the competition somewhat redundant; others may be just fed up with the ongoing political crisis – all factors that could affect the overall turnout, he adds.