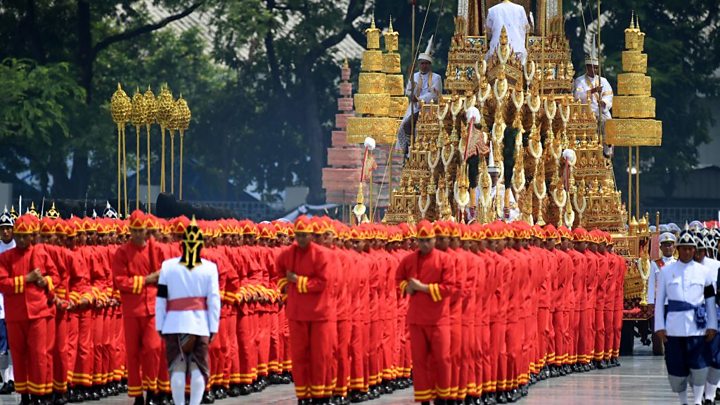 The funeral cremation ceremony for Thailand's late King Bhumibol Adulyadej has started in Bangkok, with hundreds of thousands of people lining the streets to pay their last respects.

A symbolic funeral urn was taken by chariot to the cremation site, in a procession marked by drums, flute music and an artillery salute.

Many buildings are draped in yellow marigolds, while crowds of mourners are dressed in black as a mark of respect.

The five-day funeral officially started on Wednesday with a merit-making ceremony, a Buddhist rite, in the Grand Palace.

On Thursday, a series of Buddhist rites began in the royal palace ahead of the procession.

The late king will be cremated later in a royal pyre to be lit by his son, King Maha Vajiralongkorn.

Images from the elaborate ceremony

The chariot carrying the urn in the second part of the funeral procession has been used since the late 18th Century. Weighing just under 14 tonnes, it was pulled by more than 200 soldiers.

The urn was then carried for several rounds around the cremation site, for the last leg of the procession.

The elaborate ceremony is estimated to have drawn as many as 250,000 people from across Thailand.

Many of the mourners arrived at the capital days ago, and waited in the streets overnight for the procession, clutching portraits of the late king.

A big moment for Thais

It feels as though there are two commemorations happening here in Bangkok's old royal quarter.

In the inner sanctum, the royal palace and the glittering complex of pavilions built specially for the cremation, the intricately-choreographed procession carrying the royal urn to the cremation site has been conducted by colourfully-uniformed soldiers marching with painstaking formality, presided over by King Bhumibol's son and a host of other family members, palace functionaries and government officials.

Outside, thousands of ordinary Thais, dressed in black and wilting in the fierce tropical sun, are saying goodbye to a much-loved monarch in their own way.

Many have been unable to get anywhere near the cremation site. So they have camped down by the roads, sharing food, jokes and memories of King Bhumibol. The atmosphere will become more emotional as the moment of cremation draws near, but mostly the mood has been relaxed, informal and quietly respectful.

This is a very big national moment for Thais, and they know it. King Bhumibol overshadowed the modern development of their country, and shaped the revered and very powerful monarchy of today. Without him no-one is sure how the country will fare.

The late king himself embodied these two sides we are seeing at this cremation. A modern, witty and informal man in person, he nonetheless oversaw the return of a godlike, ritualistic monarchy which has become the anchor for the stable, but ultra-conservative social order which prevails now.

Thursday has been declared a public holiday, with many businesses shut all day or closing at midday.

Members of royal families and dignitaries from more than 40 countries are attending the ceremonies.

King Vajiralongkorn will light the funeral pyre at 22:00 local time (15:00 GMT) and his father's ashes will be collected and transported back to the palace on Friday.

The late king was seen as a stabilising figure in a country hit by cycles of political turmoil and multiple coups.

Since his death on 13 October 2016, Thailand has observed a year of official mourning, with many people wearing black.

Preparations for this week's events took almost a year and have included setting up the large cremation complex near the palace.

The funeral site features sculptures of mythical creatures and auspicious animals such as lions and elephants.

According to Buddhist tradition, the funeral rituals are modelled after the universe and the cremation pyre represents a sacred mountain.

The funeral ceremonies come with strict guidelines for those attending. Thailand's lese-majeste law, which forbids any insult to the monarchy, is among the harshest in the world.

Roads across Bangkok's historic centre are shut for the day and while tourists are not expected to wear black like most Thais, they have been asked to dress and behave respectfully.