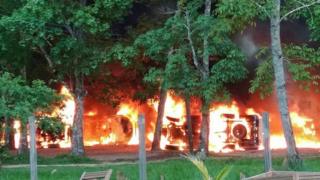 Extra troops and federal police have been deployed in the north Brazilian town of Humaita after hundreds of armed men set alight several offices belonging to environmental agencies.

The attack took place on Friday, in the heart of Brazil's Amazon region, and lasted five hours.

The authorities say it was carried out by gold prospectors in revenge for a recent raid on an illegal operation.

'An act of terrorism'

Buildings, vehicles, furniture and documents were set alight at the local headquarters of Brazil's Environmental Protection Agency (Ibama) and the Chico Mendes Institute for Biodiversity Conservation.

Police managed to foil attacks on the buildings of government agencies – Incra and Ipaam – but vehicles parked outside were set alight.

Dozens of extra troops have now been deployed in the area but the situation remains tense.

The head of Ibama in the state of Amazonas, Jose Leland Barroso, said the authorities would not step back.

"This is a barbaric attack, an act of terrorism," Mr Barroso told O Globo newspaper.

"They are challenging the Brazilian state and they will get the proper response. Ibama will carry on with its activities. They may set fire to our offices, but we will carry on."

It all began days after Brazilian officials seized boats used in a gold operation on the Madeira river, which crosses the town of Humaita.

This is the latest incident in the cat-and-mouse game played by federal agents and thousands of gold miners, known locally as garimpeiros, who operate illegally in Brazil's vast Amazon region.

They often look for gold in protected areas or indigenous lands.

In the process, they dump tonnes of health-harming mercury in the region's rivers.

Mercury is used to amalgamate gold and help separate the valuable pellets from ordinary stones and sand.