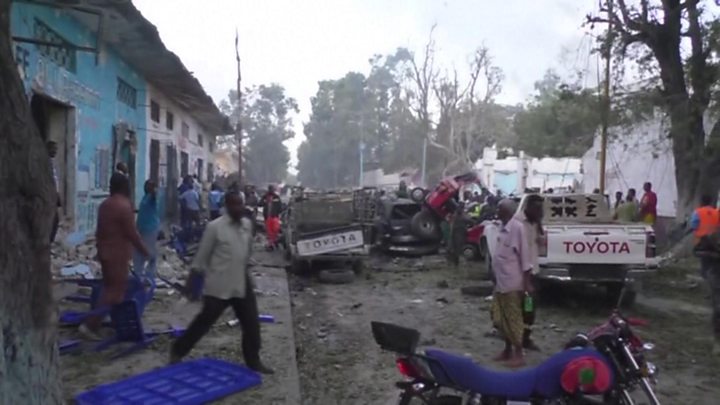 Two explosions have killed at least 14 people in the Somali capital Mogadishu, two weeks after a bomb killed 350.

The first blast was caused by a car bomb being driven into a hotel. Militants then stormed the building.

The second explosion took place near the former parliament house nearby. Officials say at least 14 died.

The Islamist militant group al-Shabab – which officials blamed for the attack two weeks ago – said it had carried out the latest bombings.

The al-Qaeda linked group denies having anything to do with the 14 October attack but it said it had chosen this latest target because it had been frequented by security officials and politicians.

They chose a time when provincial leaders were gathering in Mogadishu for a meeting with the government to agree on a united strategy against al-Shabab, due to take place on Sunday.

Sporadic gunfire continued inside the hotel as night fell, officials said. The bomb is understood to have blown up near the gates.

Police official Ibrahim Mohamed told AFP news agency that in the second explosion a "minibus loaded with explosives" had gone off at a nearby intersection.

Security official Mohamed Moalim Adan told the agency: "About 14 people, most of them civilians, were confirmed dead so far and the security forces are still working to ensure the area is clear."

Many more people were injured, according to reports.

Within an hour of the attacks, the city's Aamin Ambulance said it had already ferried 15 wounded, adding there were "many dead bodies".

The 14 October attack left at least 358 dead, and another 56 still missing.