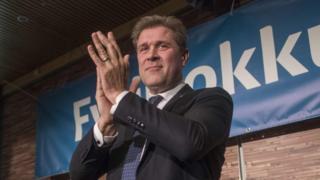 The second snap election in a year, called after a paedophile scandal, was held amid deep voter distrust.

Coalition talks are expected to be complex, with a record eight parties winning seats.

A three-party coalition is only possible if it includes both the Independence Party and its nearest rival, the Left-Green movement headed by 41-year-old Katrín Jakobsdóttir.

Most parties say investment is needed in welfare, infrastructure and tourism but disagree on how to fund it.

Mr Benediktsson called the election after it emerged that his father had written a letter saying a convicted paedophile should have his "honour restored".

The Bright Future party left the ruling coalition, triggering the election, but lost all its seats.

The government was also accused of an attempted cover-up after it refused to disclose who had written the letter of recommendation.