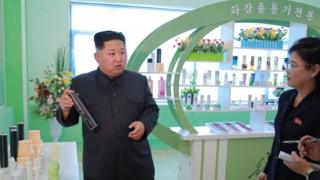 State media released undated photos of the visit on Sunday. Both women are rarely seen in public.

Why did he visit a cosmetics factory?

Over the years many countries have stopped importing luxury goods into North Korea as a result of sanctions.

North Korea appears to have developed its own cosmetics industry, with reports of local "high-end" brands such as Bomhyanggi and Unhasu becoming popular with consumers.

Though he is better known for his photo ops at military installations and missile test sites, Mr Kim's visit to a cosmetics factory serves an important propaganda purpose in telegraphing the legitimacy of Mr Kim's rule to the Pyongyang elite and middle-class.

He has frequently been photographed at factories and other key sites of North Korea's civilian economy, while state media have claimed significant advances in the production of consumer goods such as 3D televisions and smartphones.

The visit is "to show that North Korea can look out for its own people, and provide prosperity on a level comparable to Beijing and Seoul," North Korean analyst Ankit Panda told the BBC.

"Even if we know it's not true, it's important for the regime to show its people that it can provide material pleasures."

During his visit to the Pyongyang Cosmetics Factory, Mr Kim praised the company for producing "world-level cosmetics" and for upgrading its premises to a level "to be proud of in the world", reported North Korean state news agency KCNA.

Why did Mr Kim bring along his wife and sister?

Wearing a stylish black and white dress, Ms Ri is prominently featured in the photographs.

Ms Kim meanwhile cannot be identified in the photographs, but the report by state news agency KCNA mentioned she was present along with other top officials.

Mr Panda told the BBC that it was significant that he chose to appear with his wife and sister this time.

"It emphasises the primacy of the family, that blood ties are important to him, that his children will succeed him," said Mr Panda.

Given her recent promotion, Ms Kim's presence also "signals that the Kim regime wants the world to see that she's in a more visible powerful position". Earlier this month Mr Kim placed his sister in the country's top decision-making body, the Politburo.

Was the visit's timing significant?

Mr Kim's visit comes amid rising tension in the Korean peninsula over a series of North Korean missile and nuclear tests and escalating rhetoric between Mr Kim and US President Donald Trump – who is due to visit South Korea's capital Seoul in about a week's time.

The North Korean leader's visit was broadcast on state media a day after US Defence Secretary James Mattis said the US would "never accept" a nuclear-armed North Korea.

Mr Mattis, who was on a tour of Asia and was visiting Seoul on Saturday, reiterated the US stance that any use of nuclear weapons by North Korea would be met with a "massive military response".

Reporting by the BBC's Tessa Wong.