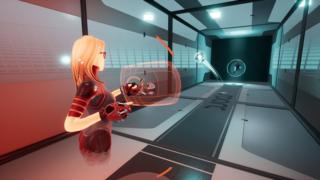 Developer CCP Games has significantly cut the time and money it is investing in virtual-reality based games.

The move was a "blow to the viability of VR as a major gaming platform", said Adam Smith on the Rock, Paper Shotgun gaming news website, adding that Valkyrie was one of the few games that tempted him to try VR.

The changes come just over a month after CCP overhauled Valkyrie in a bid to get more people playing it.

CCP has cut its investment in VR as part of a broader restructuring effort. The structural changes mean more focus on PC and mobile games, it said in a statement.

It is closing its Atlanta, US, office and selling off the development studio it maintains in Newcastle. The VR development work done at both locations will move to London.

About 30 jobs are being lost during the restructure, it added, saying that it had given staff "severance packages" and would help them find other work. A potential buyer had been found for the Newcastle office, said CCP, adding that negotiations over the sale were continuing.

The changes would have no immediate impact on Eve Valkyrie, said CCP, and a planned winter update for the game would be available as expected. Similarly, it said, Sparc development would continue in London.

"Today we have made tough, but important, changes to CCP in response to how we see the gaming market evolving in the coming years," said Mr Petursson.

"We have been front and centre in the second wave of VR and our belief in the long-term transformative power of the technology remains strong," he said, adding that it would not make "material VR investments" until the market grew substantially.

CCP would now concentrate more on Eve Online and the new games emerging from that title, he said.

Games analyst Piers Harding-Rolls from IHS Markit, said CCP took a "calculated risk" with its early VR investment, hoping that the expertise it built up would pay off as VR games became more popular.

"Unfortunately, adoption of high-end headsets – through which most VR games are being bought – has been a mixed bag since launch," he said.

IHS Markit estimates that about 2.4 million PC headsets will have been sold by the end of 2017, said Mr Harding-Rolls.

"Although millions of users is a respectable number to target, when compared to other platforms, most games publishers would consider that level of adoption small and niche," he added.

This explained why CCP had switched to concentrate on the PC and mobile markets which have hundreds of millions of potential players, he said.