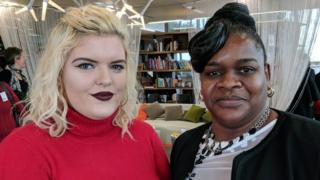 Women's charity Refuge is warning about the rise of "tech abuse" – the use of technology to spy on or harass a partner.

Many victims of domestic violence report being either being harassed via online messages or having their activity monitored via their phones.

However, many do not report it to the police, the charity said.

Euleen Hope was a technophobe who escaped the control of her tech-savvy abusive ex-partner after 10 years.

He set up her email and social media accounts for her, which meant he had full access to them.

He also replaced her flip-phone with an iPhone which he then set up to be mirrored on to the pair's iPad so he could monitor her calls and messages, and activated the phone's location-tracker saying it would help her to get the bus.

"You wouldn't think he was doing anything bad, he showed you what he was doing," she said.

"I didn't realise it was going to be part of my entrapment."

When she noticed things such as the iPad ringing when her phone rang, her ex told her he was just testing a new app.

He also installed cameras around the house under the guise of security.

"My twin sister came round one day to visit. Normally if my friends or family came over he would sit in the room with us," she recalled.

"I moved behind the camera and told my sister to keep talking, I went up the stairs and saw him listening to what he thought was our conversation."

Ms Hope's former partner was also physically and emotionally abusive and eventually served a prison sentence for assault and GBH.

Refuge is teaming up with Google to train its staff to better support victims who contact it as part of a new programme.

"Domestic violence is the biggest issue which impacts on the police," said Dame Vera Baird, police and crime commissioner for Northumbria, speaking at the project launch.

"Every 30 seconds there is a domestic violence call. Two years ago, it was every minute.

"Northumbria's police force gets 32,000 calls a year and that's maybe a fifth or a quarter of what is actually going on."

A 2016 survey by Comic Relief found that four out of five women who experienced abuse said their partner monitored their activity.

Twenty-year-old blogger Beth Ashley said a former boyfriend had no interest in tech until she tried to end their relationship because he was controlling and sexually abusive.

"When I got with him he didn't even have a phone," she said.

"I thought he was a massive technophobe until we broke up. Suddenly he started all these social media accounts and used them as a harassment tool."

She says he also sent her a suicide note via Facebook Messenger along with graphic images of self-harm, which she later discovered he had found online.

"I went round the next day and he was just sitting there on his Xbox," she said.

She says he would regularly turn up where she worked and she would end her shift to find 50 messages from him on her phone.

Ms Ashley was very active on social media because of her work as a blogger and online writer.

"There were times when I wanted to delete the blog, the magazines," she said.

"I have these random moments of wanting to be invisible. Considering my job, that would be awful."

Ms Ashley says that she had to block old friends on social media in case one of them accidentally gave him information about her activities.

After reporting him to the police, the online harassment stopped, she said.

"But the paranoia stayed for a long time," she added.

Sandra Horley, chief executive of Refuge, said the charity had seen a case where a man had hacked the CCTV at the pub where his wife worked so he could monitor her, and another who put a tracker on his partner's car, moved it and then accused her of losing it.

"She thought she was losing her mind," she said.

"Technological abuse is part of a broader pattern of domestic violence.

"This project was born out of our clients' experiences of technology-related abuse, and we will continue to make sure their needs and experiences shape our work in the years ahead."