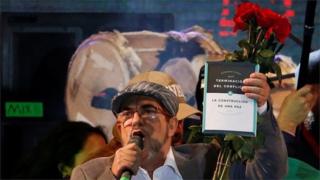 The leader of the demobilised Farc rebel group has announced he will run for president in 2018.

Rodrigo Londoño, known as Timochenko, signed a peace deal with the Colombian government a year ago. He will run for the party founded by the rebel group.

His chances of becoming president are deemed to be minimal as many Colombians are loath to see a former rebel representing them.

Right-wing parties in particular have been critical of the peace process for allowing Farc members to run for office without having to serve prison time.

More than 260,000 people were killed in more than five decades of armed conflict between the Farc, government forces and right-wing paramilitaries.

Polls suggest that many Colombians continue to question the Farc's commitment to peace.

Its party has retained the same acronym but it now stands for Revolutionary Alternative Force of the Common People, rather than the Revolutionary Armed Forces of Colombia.

From rebel to politician

Timochenko succeeded Alfonso Cano as the Farc's top commander after the latter was killed by the Colombian armed forces.

Soon afterwards, he signalled his willingness to enter to enter into peace talks with the government.

After four years of negotiations, the two sides reached an agreement, only for it to be rejected by the Colombian people in a referendum.

A revised agreement was signed by Timochenko and President Santos on 24 November 2016 and approved by Congress.

In it, the Farc agreed to lay down their weapons and turn themselves into a political party.

They officially ceased to be an armed group on 27 June when a ceremony marked the end of the disarmament process.

Timochenko's running mate will be Imelda Daza, who spent more than 20 years in exile in Sweden.

The first round of the presidential election will be held on 27 May 2018.

The incumbent president, Juan Manuel Santos, is not running again.

The Farc will also be fielding candidates for the house of representatives and the senate.

Under the terms of the peace deal, they are guaranteed five seats in each of the chambers.