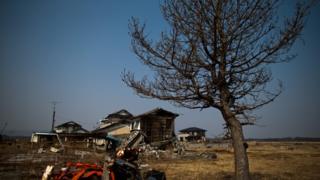 Drones are delivering food to residents of a Japanese town devastated by the Fukushima nuclear disaster where access to shops is limited.

Residents were allowed to return to the Minamisoma area last year but obtaining supplies can be difficult.

Operators of the drone food delivery service said it was the first of its kind in Japan.

A 2011 earthquake and tsunami in Fukushima triggered the worst nuclear disaster since Chernobyl.

Convenience store chain Lawson has worked with e-commerce firm Rakuten and this week launched a drone service in the Odaka district of the city of Minamisoma, which has a large population of older people.

The district is roughly within a 20km radius of the Fukushima Daiichi Power Station, the site of the nuclear disaster triggered by an earthquake and tsunami six years ago. People were forced to leave their homes because of radiation concerns.

The Japanese government lifted an evacuation order for Minamisoma in October 2016 and allowed residents move back to the area following decontamination efforts.

"The town is starting to regain its former liveliness as its residents continue to return home," Lawson spokesperson Ken Mochimaru told the BBC.

"However, improving the shopping environment for daily necessities, food, and other products represents a high-priority challenge," he said.

The drone service is designed to help. Shoppers can order hot food like fried chicken and household items, which are sent from a nearby Lawson store to a mobile food van that operates at a community centre in the area. The companies are trialling the service for the next six months.

The drone can carry up to 2kg of goods.

As well as its shops, Lawson operates mobile vans across Japan, particularly in rural and mountainous regions where access is difficult, as well as serving ageing populations in urban areas.

More than a quarter of Japan's population is aged over 65, and set to increase over the next two decades, as the total number of people in the country shrinks.

IcetruckNovember 1, 2017
Like story:
tweet
PIA: Pakistan airline leaves two coffins behind in New York
Daughter of Apple engineer says he was fired after she posted video of iPhone X