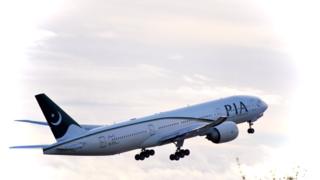 Pakistan International Airlines (PIA) has ordered an inquiry, after two sets of human remains it was repatriating were left behind in New York.

The two coffins were meant to be flown to Lahore on 28 October – but were left at JFK Airport by mistake.

It was PIA's last New York-Lahore flight, as it had just suspended the route – so Etihad Airlines had to step in.

PIA said the error was caused by the handling company on the ground.

PIA said it "regrets the inconvenience caused due to negligence on part of the airline's ground handling agency… and expresses its sympathies with the family members of the deceased persons".

One of the families had now asked for their relative be buried in Maryland, while the other body was being transferred by Etihad Airways back to Lahore, PIA's statement added.

PIA said it would look after the transfer arrangements, adding that "all expenses will be borne by PIA".