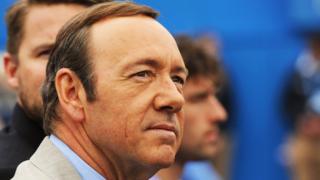 US filmmaker Tony Montana claims he was groped by the actor in a Los Angeles bar in 2003.

Montana says he was left with PTSD for six months after he claims Spacey "forcefully" grabbed his crotch.

Film director Montana told Radar Online that he was in his thirties when the incident took place at the Coronet Bar in LA.

He says he removed Spacey's hand from his crotch and walked away, but claims the actor later followed him into the men's toilets.

"It seems the only requirement was to be a male under the age of 30 for Mr Spacey to feel free to touch us," he wrote in a Facebook post.

He said he fended off two "unpleasant" advances from Spacey that "bordered on harassment," but that others were afraid to do so.

"There are a lot of us who have a 'Kevin Spacey story'," says Cavazos.

The Old Vic has set up a confidential complaints process for anyone connected to the 200-year-old theatre to come forward.

It said in a statement: "We aim to foster a safe and supportive environment without prejudice, harassment or bullying of any sort, at any level."

'Seedy and a bit weird'

Separately, a British man claims Kevin Spacey exposed himself to him in 2010, when he was working at a hotel in West Sussex.

Speaking to the Sun, Daniel Beal alleges the Usual Suspects star flashed his private parts, saying: "It's big, isn't it?" and tried to get the then 19-year-old to touch him.

The former bartender claims Spacey also invited him up to his room, but he rejected the star's advances.

Beal says Spacey gave him his £5,000 watch later that same evening, and a few weeks later called him asking to meet up.

He told the Sun: "In hindsight, that must have been grooming. He was just like his character in House Of Cards – seedy and a bit weird."

'Either stupid or predatory'

The BBC has also uncovered allegations of sexual misconduct against Spacey by a man who claims he was harassed by the star in the mid-1980s.

The man, who wanted to remain anonymous, says he met the star at theatre school before being invited to New York by him, when he was 17 years old.

Speaking to the Victoria Derbyshire programme, the man (who they've called John), says despite sleeping on the star's sofa he woke up fully clothed with Spacey lying on him, in his underwear.

John, who still works in the entertainment industry, said Spacey again became "affectionate" the second night he was in the city.

"I burst into tears because I couldn't articulate any more what was happening to me. I was scared… To his credit, he backed off and we went to sleep."

Reflecting on his experience, John says: "It seems he was grooming me. For me, I never let on that that's what I was interested in. I never discussed it, nor did I want it.

John points out neither of them drank any alcohol that weekend.

"He was either very stupid or he was predatory – or maybe a little of both. I was uncomfortable at best, traumatised at worst, emotionally.

John says he didn't tell the authorities or his parents at the time, although he has since told friends.

The BBC has contacted representatives of Kevin Spacey for his response to these allegations.

Meanwhile, production of the sixth season of Netflix series House of Cards has been suspended following the sexual assault allegations against the actor.

The show was already due to end after this season, but production is now suspended "until further notice".

Spacey has also been dropped as the recipient of a special Emmy award he was due to receive next month.