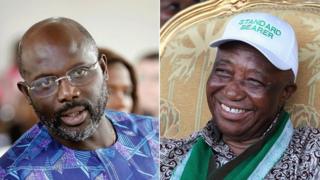 Liberia's Supreme Court has ordered preparations for Tuesday's presidential run-off to be halted amid allegations of fraud in the first round.

Ex-football star George Weah and Vice-President Joseph Boakai are due to go head-to-head in the 7 November vote.

But the Liberty Party's Charles Brumskine, who came third in the first round, has challenged the result.

Following the announcement, riot police were deployed to guard the court and electoral commission.

Later, a delegation arrived in the capital, among them the heads of the regional grouping Ecowas, and the Africa Union. They are meeting the heads of all the political parties.

Who does the president support?

Mr Brumskine and the Liberty Party said the first round was "characterised by massive systematic irregularities and fraud", including polling stations opening late and therefore preventing people from voting.

The election is to be postponed until his accusations are properly investigated, the court says.

But even if his case is thrown out, observers say it is likely to delay next week's vote as the commission will have lost valuable preparation time.

The Liberty Party is not alone in its allegations. The accusation of irregularities is backed by two other political parties – including Mr Boakai's Unity Party, which on Sunday alleged that its own president had interfered in the process.

In a statement, it said Ellen Johnson Sirleaf, Africa's first female elected president and a winner of the Nobel Peace Prize, had attempted to influence the outcome of the poll.

Relations between Mrs Sirleaf and her deputy are not warm, with some ruling party officials saying the vice-president was not her choice to succeed her, the BBC's Jonathan Paye-Layleh reports from the capital Monrovia.

Mrs Sirleaf, 79, has however said more than twice that she supports Mr Boakai, who won 28.8% of the vote compared to Mr Weah's 38.4% in the first round.

Mr Weah's Congress for Democratic Change (CDC) responded to the accusations by noting it was "sad for a ruling party that has been in power for 12 years [to] be crying".

International observers, including the European Union, had not raised major concerns about the first round of voting, although some irregularities were observed, AFP news agency reports.

The court has instructed the Liberty Party and the electoral commission to present their cases by Thursday.

However, election commission spokesman Henry Flomo told the BBC it had not yet been officially informed of the Supreme Court's order, made late on Tuesday.

But if there is an injunction, the commission will abide by it as the Supreme Court is the highest court and its decisions are final, Mr Flomo added.