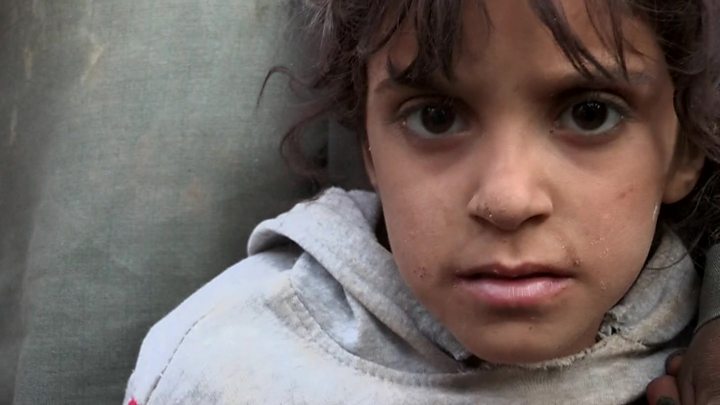 "The city is completely liberated from terrorism," the state TV report said.

Other reports said the Syrian army and its allies were clearing the last pockets of resistance from IS.

IS had held most of the city since 2014. It was of strategic importance to IS because of its proximity to the border with Iraq.

Earlier the Syrian Observatory for Human Rights, a UK-based activist group, said government forces had taken control of the city after weeks of fighting.

Some 350,000 civilians in the province have been forced to flee their homes.

Why is Deir al-Zour important?

The city lies on the Euphrates river about halfway between the city of Raqqa, previously the headquarters of IS's self-styled "caliphate", and the Iraqi border.

The cross-border province was also a symbol of the jihadists' intention to eradicate all the region's frontiers and lay to rest the 1916 Sykes-Picot agreement, resented by many Arabs.

Last month a US-backed alliance of Syrian fighters pushed IS out of Raqqa,

In September, the Syrian army broke a siege by IS in part of Deir al-Zour that had trapped an estimated 93,000 civilians in an enclave on western bank of the Euphrates since 2015.

The militant group is now confined to just a few pockets in Deir al-Zour province.

The Syrian Democratic Forces (SDF) and Syrian government forces – which are backed by Russian air strikes and fighters from Lebanon's Hezbollah movement – have been carrying out separate offensives in Deir al-Zour province with the aim of taking control of Albu Kamal, a key crossing on the border with Iraq.

On Sunday Iraqi government forces began an offensive to recapture the town of al-Qaim, a town in Iraq still held by IS. It lies across the border from the Syrian town of Albu Kamal.

Soldiers, police, Sunni tribesmen and mostly Shia paramilitary fighters, some backed by Iran, are taking part in the assault on al-Qaim and Rawa.

Iraqi government forces have now driven IS out of about 95% of the land the group once held in Iraq and freed more than 4.4 million Iraqis from its rule, the US-led coalition fighting IS says.