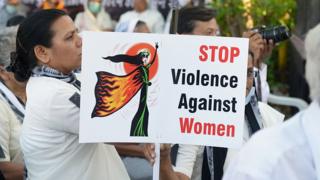 The parents of a teenage girl in India have caught their daughter's alleged rapists after police refused to register their complaint.

The parents, who are police officials, said that one officer accused their daughter of "making up a filmy story".

A gang rape case was registered only after the parents personally caught two suspects and brought them to a police station in the city of Bhopal.

Two other men have been arrested, and a fast-track trial ordered.

The 19-year-old victim was returning from a study centre on Thursday evening when two men attacked her under a bridge in the central Indian city.

After raping her for hours, they tied her up and called two more men who also took turns to sexually assault her.

Two police officers have been sacked for refusing to lodge the complaint.

The parents told The Times of India newspaper that they spotted two suspects roaming freely and decided to catch them.

"While coming from Habibganj [railway station], my daughter saw two of the rapists loitering in front of Mansarowar Complex, which is around 500 metres from the spot of the crime," the mother told the paper.

"We [caught] and handed over the duo to the police," she added.

"It's one of the worst experiences of my life. If I, as a policewoman, have to face such problems in filing my daughter's gang rape complaint, I can't imagine what a common man goes through," she added.

The father said it was shocking that the incident took place just 500 meters away from a busy railway station.