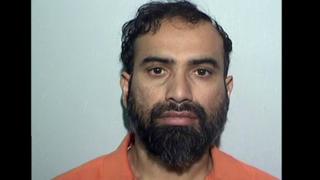 Man jailed for 27 years for plotting to murder US judge

An Indian citizen has been jailed for 27 years in the US for sending funds to al-Qaeda and plotting to kill a judge.

Yahya Farooq Mohammad, 39, was awaiting trial on charges of sending money to the Islamist militant network when he offered an inmate $15,000 (£11,000) to murder the judge due to hear his case.

The inmate introduced him to a man who was in fact an undercover FBI agent.

"He threatened the safety of our citizens, a judge and the independent judiciary. Now he is being held accountable," said US Attorney Justin Herdman.

The federal judge Mohammad plotted to have kidnapped and killed was Jack Zouhary. He has served as a district court judge in northern Ohio for more than a decade.

In a statement shared by local news website the Toledo Blade, Judge Zouhary said: "I never anticipated I would face the ordeal of a defendant putting a price on my head and taking concrete steps to hire for my murder."

Yahya Farooq Mohammad pleaded guilty to one count of conspiracy to provide and conceal material support or resources to terrorists and one count of solicitation to commit a crime of violence.

Three other men, including Mohammad's brother, are pleading not guilty to sending money to al-Qaeda and are awaiting trial.

The four men were arrested in September 2015 and charged with sending $22,000 (£17,000) to the cleric Anwar Al-Awlaki, a leader of Yemen-based al-Qaeda on the Arabian Peninsula. Al-Awlaki was later killed in a drone strike.