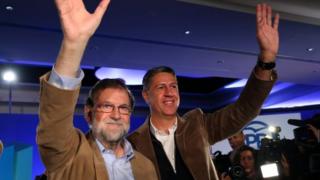 He addressed a campaign event on his first visit there since imposing direct rule on the region a fortnight ago.

Defending his decision in Barcelona, he said he had "exhausted all roads" after the Catalan government's unilateral declaration of independence last month.

Several key Catalan leaders are currently being detained over the move.

Some 750,000 people protested in Barcelona on Saturday against the arrests, local police estimated.

The crisis was sparked by a disputed referendum held in Catalonia in October, which had been declared illegal by the Spanish courts.

Catalan officials said the independence campaign won 92% of the vote, from a turnout of 43%. Many of those who were against independence did not cast votes, refusing to recognise the legitimacy of the referendum.

Speaking at a campaign event in Barcelona for his Popular Party (PP) on Sunday, Mr Rajoy called on the participation of the "silent majority" to "convert their voice into a vote".

He told PP supporters that the right result would boost Spain's economic growth next year to above 3%.

He called on companies not to leave the region, after hundreds of firms moved their headquarters away amid uncertainty over the region – which accounts for a fifth of Spain's economy. He also urged people in Spain to continue buying Catalan products.

Rajoy's message to the faithful

By James Reynolds in Barcelona

For a short while, the man who ultimately runs Catalonia was in Catalonia. But Mariano Rajoy's advisors made sure he would not run into vocal pro-independence opponents.

Instead, he spoke to the party faithful. Mr Rajoy's main campaign event was held inside a hotel ballroom, in front of mostly older supporters.

But the pro-Spain movement as a whole makes up about half the population of Catalonia. An election victory for this sector would make it much harder for pro-independence forces to make another attempt to break away from Spain.

After speaking for 25 minutes, Mr Rajoy posed for pictures and made his way out of the hotel amid a crush of supporters.

"Will you meet your opponents?" I asked him. "Yes," he said. But he didn't say where or when.

Since the crackdown by Madrid, Catalonia's sacked President Carles Puigdemont has gone into self-imposed exile in Belgium, and many of his top allies have been remanded in custody.

Thousands took to the streets of Barcelona on Saturday calling on Spain to free the ministers, as well as two grassroots campaign leaders being detained.

They marched behind a banner declaring "We are a republic", and carried placards that said the detainees were political prisoners.

The sacked former ministers are accused of alleged rebellion and sedition, while the two activists were arrested over a mass protest before the referendum.

Mr Rajoy's PP won just 8.5% of the vote in the last regional elections two years ago.

However, her party has also voted to break a pact with the Socialist party in Barcelona in protest at its support for the national government's decision to invoke Article 155 of the constitution, imposing direct rule on Catalonia.