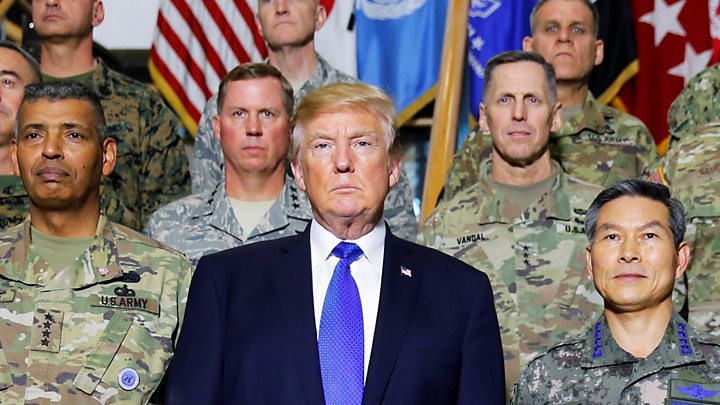 For the first time in over 40 years, Congress has examined a US president's authority to launch a nuclear attack.

The Senate Foreign Relations Committee hearing was titled Authority to Order the Use of Nuclear Weapons.

Some senators expressed concern that the president might irresponsibly order a nuclear strike; others said he must have the authority to act without meddling from lawyers.

The last time Congress debated this issue was in March 1976.

In August, Mr Trump vowed to unleash "fire and fury like the world has never seen" on North Korea if it continued to expand its atomic weapons programme.

Last month, the Senate committee's Republican chairman, Senator Bob Corker, accused the president of setting the US "on a path to World War 3".

"This is not a hypothetical discussion," the Maryland Democrat said.

Some senators present said they were troubled about the president's latitude to launch a nuclear strike.

Chris Murphy, a Democrat from Connecticut, said: "We are concerned that the president is so unstable, is so volatile, has a decision-making process that is so quixotic, that he might order a nuclear-weapons strike that is wildly out of step with US national-security interests."

One of the experts, C Robert Kehler, who was commander of the US Strategic Command from 2011-13, said that in his former role he would have followed the president's order to carry out the strike – if it were legal.

He said if he were uncertain about its legality, he would have consulted with his own advisers.

Under certain circumstances, he explained: "I would have said, 'I'm not ready to proceed.'"

One senator, Ron Johnson, a Wisconsin Republican, asked: "Then what happens?"

People in the room laughed. But it was a nervous laugh.

Another expert, Duke University's Peter Feaver, a political science professor, explained that a presidential order "requires personnel at all levels" to sign off on it.

It would be vetted by lawyers, as well as by the secretary of defence and individuals serving in the military.

"The president cannot by himself push a button and cause missiles to fly," said Prof Feaver.

Another expert, Brian McKeon, a former under-secretary of defence for policy, said military officials would stop the president if they felt he was acting in a rash manner.

"I don't think we should be trusting the generals to be a check on the president," he said.

One of the key questions at the hearing was whether the senators – and Americans in general – had confidence in the president to make such a decision within minutes, or even seconds.

At that moment, the defence secretary, military officials and lawyers would have little time to review the president's decision.

Some of the senators said the president needed to have the freedom to act fast and forcefully under those circumstances.

Senator Marco Rubio explained that the US president "has to have the capacity to respond if we are under attack" – and not be circumvented by "a bunch of bunker lawyers".

Senator James Risch, an Idaho Republican, reinforced Mr Rubio's message, explaining that officials in Pyongyang should not misinterpret their discussion.

"He will do what is necessary to defend this country," said Mr Risch.

At the end of the hearing, the lawmakers and experts agreed that the nuclear arsenal should be modernised – just in case.