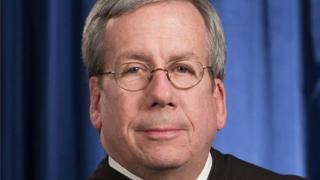 Ohio voters are in shock after a top judge boasted of having been "sexually intimate" with "approximately 50 very attractive females".

State Supreme Court Judge Bill O'Neill, who is a Democratic candidate for state governor, made the claim on Facebook on Friday afternoon.

In a follow-up interview he defended his post and a senator who was pictured apparently groping a sleeping woman.

His post began: "Now that the dogs of war are calling for the head of Senator Al Franken I believe it is time to speak up on behalf of all heterosexual males."

Judge O'Neill noted that as a candidate for governor, his admission would "save my opponents some research time".

"In the last fifty years I was sexually intimate with approximately 50 very attractive females," wrote the Chagrin Falls, Ohio, native.

The 70-year-old Democrat went on to describe two of the women and his alleged encounters with them.

"It ranged from a gorgeous personal secretary to Senator Bob Taft (Senior) who was my first true love and we made passionate love in the hayloft of her parents barn."

He later edited the post to clarify it was the secretary – not Senator Taft – with whom he purportedly had sexual relations.

In an interview with Cleveland.com after the post was published, Judge O'Neill confirmed he had written it.

He told the publication the number "50" could be incorrect since he "doesn't keep count".

Judge O'Neill also said he did not think it improper for a Supreme Court justice to divulge particulars of his sex life.

According to Ohio media, Judge O'Neill must retire from the bench when his current term ends in 2019 due to age restrictions.

He is the only Democrat not just on the state Supreme Court, but to hold state-wide office in Ohio.

The over-sharing jurist launched his campaign for governor in late October on a platform of expanding mental care access, tax incentives for solar power, and legalising cannabis – the last of which he mentioned in his Facebook tell-all.

The post provoked an avalanche of responses on social media ranging from baffled to admiring to derisive.

One woman wrote: "YOU ARE TRASH."

A man posted: "You earned my vote."

Many pointed out the judge's encounters appeared to be consensual in contrast to Senator Al Franken, who along with Senate hopeful Roy Moore, is accused of non-consensual sexual contact.

"No words can convey my shock," she said.

"This gross disrespect for women shakes the public's confidence in the integrity of the judiciary."

Cincinnati City Councilman Chris Seelbach wrote to Judge O'Neill on Twitter: "Not only have you lost any glimpse of support from me, (you've) also lost my respect."

Mary Taylor, Republican lieutenant governor of Ohio, posted on Twitter: "There's a very serious conversation going on right now in this country about sexual harassment and @BillForOhio's crass post is ill-timed and dismissive at best."

"We have to be better than this," she added.

"Lighten up folks," he scolded his critics.

"This is how Democrats remain in the minority."

IcetruckNovember 17, 2017
Like story:
tweet
Chance the Rapper Considers Name Change in ‘SNL’ Promo With Eminem and Leslie Jones
Sia has created a holiday album for those who don’t love classics