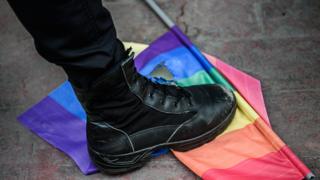 The Turkish capital Ankara has banned all gay festivals, screenings, forums and exhibitions on security grounds.

The governor's office said on Sunday that it also wanted to protect public order and sensitivities.

The announcement follows a move last week to ban a festival of German-language gay films also due to have been held in the city.

Homosexuality is legal in Turkey but activists say homophobia is rampant.

["From Saturday] 18 November until further notice, all film and theatre events, screenings, panels, colloquium, exhibitions, etc… have been banned," the city administration said on its website.

It argues that such functions in Ankara and its surrounding province are likely to "provoke reactions within certain segments" of society and are also at risk of being targeted by "terrorists".

The announcement is likely to increase concern among gay activists in Turkey that their rights are being curtailed under the government of President Recep Tayyip Erdogan and his Justice and Development Party (AKP), which is rooted in conservative Islam.

Gay activists says they have been subjected to various forms of discrimination including harassment, abuse and rape.

The popular annual gay pride rally in Istanbul has been blocked for three years by the authorities, who cited security concerns. In 2003 Turkey became the first Muslim majority country to allow a gay pride march.

The perceived erosion of civil liberties in Turkey has caused concern in the West following the failed military coup of July 2016.

More than 50,000 people have been jailed since then, many accused of having links to the plotters. About 150,000 people mostly working for the government have been sacked or suspended.

In a statement announcing the German film ban last week, the office of Ankara Governor Mehmet Kılıclar said the festival's content "could incite grudges and enmity toward a part of society".

Intelligence suggested that "terror organisations" were seeking "to attack dissident groups or individuals" and that the screening "could have been provocative".

The event's organisers said the festival had already been attacked on social media before it was banned.