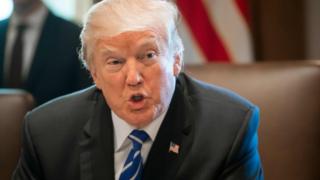 President Trump has announced that the US is re-designating North Korea a state sponsor of terrorism, nine years after it was removed from the list.

In a cabinet meeting on Monday, he said the move will trigger "very large" additional economic sanctions.

Mr Trump blamed the country's nuclear programme, and support for what he called international acts of terrorism.

While announcing the decision, the US president said it "should of happened a long time ago".

He said the regime must act lawfully and cease its nuclear weapons programme.

It comes after the president returned from an extensive tour of Asia last week.