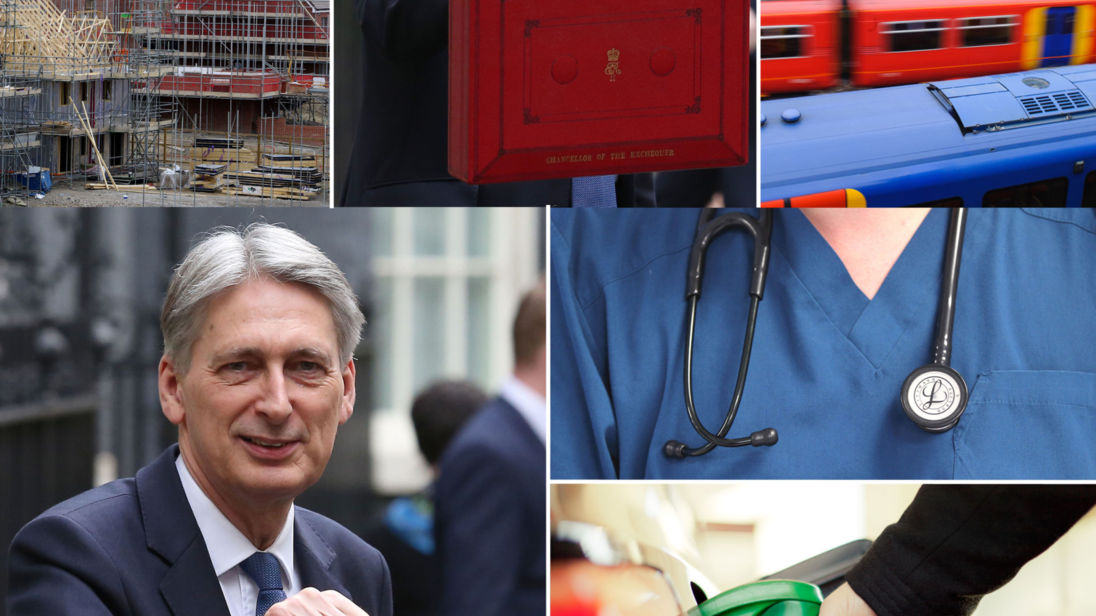 Phillip Hammond will attempt to get Britain "fit for the future" as he faces the toughest set of Budget constraints of any Chancellor in a generation.

He will map out a vision of hi-tech growth rebooting Theresa May's government with little fiscal or political firepower.

The Chancellor will say: "For the first time in decades, Britain is genuinely at the forefront of a technological revolution, not just in our universities and research institutes, but this time in the commercial development labs of our great companies and on the factory floors and business parks across the land.

"So we must invest to secure a bright future for Britain, and at this Budget that is what we choose to do."

:: Eight things to read before the Budget

The Chancellor is expected to inject hundreds of millions extra into the NHS as the single biggest measure, but still disappoint expectations within the health system of a £4bn boost to avert an immediate waiting times crisis.

He will call time on centrally enforced public sector pay caps, but at the same time is not expected to provide the funding for a general pay rise in line with inflation.

:: Sky correspondents' tips on what to expect

In a battle to improve the UK's skills and better long-term productivity, Mr Hammond is also due to announce a £177m scheme to give schools and sixth forms in England £600 for every additional student taking A-level maths or core maths qualifications.

In addition, a £42m fund will give £1,000 worth of training for every teacher in selected schools in areas that have "fallen behind".

The Chancellor will also seek to bridge the generational gap in Conservative popularity by offering cheap rail travel, cuts to stamp duty and an extensive increase in housebuilding.

The ambition to increase housebuilding to 300,000 a year is something not reached in the UK since 1978, a time when the government itself built half of all homes.

It is also the first minority government Budget since Denis Healey's final Budget of that same year.

The Treasury has undergone an unprecedented outreach programme, speaking to groups of Tory MPs to ensure they are consulted on ideas and on side over the plans.

The policies have been cross-checked with the manifesto, and to ensure "watertight" implementation.

In each of the past three Budgets, the Conservatives have had to perform a U-turn on one of their top items, and that was at a time when the party had its own majority.

"It can't be a grandstanding big radical Budget – we wont reset the political economy of Britain in a Budget when you don't have a majority," said one influential Tory.

"But it will be a positive Budget – looking to the future of a fundamentally strong economy."

:: Quiz: How would you spend the Budget?

DUP sources are expecting few surprises, having signed up to supporting the Conservatives in its Budget motions.

The party was not formally involved in setting the Budget but has indicated policies it would and would not support.

Some measures agreed in the confidence and supply agreement that kept Mrs May at Number 10 are expected to materialise today in some form – including reforms to VAT in the Northern Irish hospitality sector and air passenger duty on short-haul flights.

Mr Hammond was supported by some Cabinet colleagues who spoke privately to Sky News.

"Philip has got a point of view that ought to be respected. He has the toughest job in Government," said one.

An area of pain may be on diesel fuel, already criticised by the Government over pollution.

One revenue-raising idea is to reduce the subsidies on "red diesel" for industrial use.

Although farmers are expected to keep access to the cheap dyed fuel, the overall subsidy costs £2.3bn a year for a high pollutant that the Government is trying to phase out.

Other pre-announced measures include a consultation over a tax on single-use plastics, a railcard for cheaper travel for 26 to 30-year-olds, and extra money for Northern Powerhouse rail connections.

The biggest move could in fact be the result of a downgrade by the independent Office for Budget Responsibility to the expected productivity performance of the economy, after near stagnation for a decade since the financial crisis.

This has a considerable impact on borrowing numbers, wiping out a better tax take this year.

Mr Hammond is also expected to provide funding to shorten a six-week wait for payments under Universal Credit by a week, after a number of Tory MPs expressed concerns.

The Opposition has called for the Chancellor to abandon austerity, raise public sector pay and pause the Universal Credit programme.