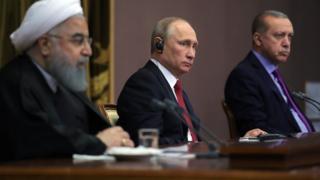 The Russian president has unveiled plans for a Syrian peace congress in a bid to end the six-year civil war.

In a joint statement they urged the Syrian government and opposition to "participate constructively".

No date for the proposed congress has been announced. It is to be held in the Russian Black Sea resort of Sochi.

News of the latest initiative came as Syrian opposition groups met in the Saudi capital Riyadh to try to agree a joint position ahead of the latest round of UN-backed talks in Geneva next week.

However, the head of the High Negotiations Committee (HNC) – a Saudi-backed umbrella group that represented the opposition at the last round – stepped down on Monday.

Riyad Hijab said he had been "forced to announce" his resignation after almost two years in the post, but wished the committee "further achievements".

Mr Putin's talks with his Turkish and Iranian counterparts in Sochi came days after he hosted his Syrian ally, President Bashar al-Assad.

Mr Putin told Mr Assad that the military campaign was "wrapping up", but there was still "a long way to go".

He said at the time that he wanted to "move forward with the political process".

"The congress will look at the key questions on Syria's national agenda," Mr Putin told reporters, sitting alongside Mr Rouhani and Mr Erdogan on Wednesday.

"First of all that is the drawing-up of a framework for the future structure of the state, the adoption of a new constitution, and, on the basis of that, the holding of elections under United Nations supervision."

Mr Putin said the process of reform would not be simple and would require "compromise and concessions from all parties, including obviously the Syrian government".

He said the congress, to be held in Sochi, could be a "stimulus" for the UN-hosted talks in Geneva.

Correspondents say it remains to be seen which groups will be invited to the congress. The list of participants has proved a stumbling block in previous peace initiatives.

The issue of Mr Assad's future has also been a sticking point in previous talks.

Opposition groups along with the leaders of the US, UK, France, Germany and the EU have long insisted that Mr Assad should step down.

Mr Putin announced in March 2016 that his forces had largely achieved their objectives in Syria, but the campaign continued.

Russia has been accused of killing hundreds of Syrian civilians with its air strikes, something it has denied.

In Syria's tortuous war, the new mantra is "reality." Western and Arab states now recognise, however reluctantly, there is no choice but to pursue the possible over the preferable now that the war has gone President's Assad's way.

Gone is the mantra "Assad must go". Saudi officials speak of "broadening the opposition." That means bringing in groups whose first demand is not the president's departure.

That is one of the main reasons why Riyad Hijab, who headed the HNC, has resigned.

But there's also another new political reality in the region. Weeks ago, an Arab minister hinted to me it may be time to choose someone else to lead the Saudi backed HNC – Mr Hijab was now seen as too close to Saudi rival Qatar.

And there's a third reality. Arab states and the US want to work with Russia to try to pursue their main priority in Syria now: to diminish Iran's presence.