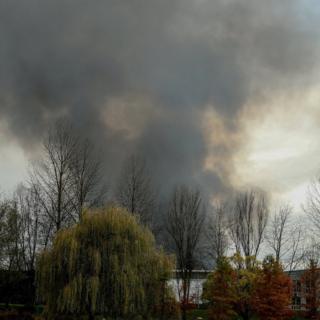 A huge fire at a waffle factory has cast a black pall of smoke across the skies of the Belgian capital, Brussels.

The Milcamps waffle factory, in the Forest district, was immediately evacuated when fire broke out at about 13:00 local time (12:00 GMT).

No injuries are reported but the factory has been destroyed, reported local media.

The Brussels mayor has warned that the smoke could be toxic and urged residents to close their windows.

Cars were requested to keep their distance.

Fifty firefighters have contained the blaze, reports say, but thick black smoke could be seen belching from the factory from miles away.

Businesses and schools nearby have been closed. Trains from Brussel-Zuid station were halted temporarily but are now said to have resumed.

Some Twitter users made a dry reference to Belgium's status as the birthplace of the waffle.

Three cups of coffee a day 'may have health benefits'

Australian men forced on to car roof to escape crocodiles