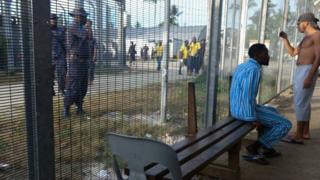 Police in Papua New Guinea (PNG) have entered a former Australian-run detention centre in a bid to get asylum seekers who remain there to leave, the Australian government has confirmed.

Hundreds of men have refused to leave the Manus Island centre since it was shut down on 31 October, citing fears for their safety.

On Thursday, the men inside the centre said that PNG police had given them a one-hour deadline to leave.

Prime Minister Malcolm Turnbull said his nation would "not be pressured" into accepting the men, reiterating a long-held policy that such a move would encourage human trafficking.

One refugee, Abdul Aziz Adam, said about 420 asylum seekers remained in the centre on Thursday, and they would act only peacefully.

He told the BBC a large number of police officers had entered the compound.

Another refugee, Behrouz Boochani, tweeted that an Australian police officer appeared to be "guiding" some local officers. This was denied by Australian Federal Police, who said they had no involvement in the operation.

Australia has repeatedly said that the alternative accommodation is ready.

However, the UN's refugee agency said on Tuesday that housing remained "under construction", was inadequately secured, and lacked "the most basic services" such as a medical care.