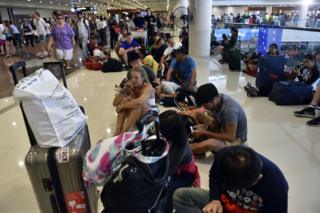 Indonesian officials have shut the international airport in Bali for a second day, as Mount Agung spews volcanic ash into the atmosphere.

Massive plumes of dark ash were seen reaching as high as 3km (2 miles) above the summit of the rumbling volcano, which began erupting last week.

Officials raised the alert to the highest level on Monday, fearing an imminent major eruption.

Up to 100,000 people have been ordered to evacuate the vicinity.

Volcanic ash can damage aeroplane engines or even cause them to fail, and also clogs fuel and cooling systems. Pilot visibility can also be hampered.

On Tuesday, they announced they would extend the closure to Wednesday 07:00 local time (00:00 GMT).

Sutopo Purwo Nugroho, spokesman for Indonesia's national disaster agency, said that the ash was being drawn southwest – towards Bali's main airport – by a tropical cyclone in the Indian Ocean.

The airport on neighbouring Lombok island however has been re-opened, he added. Authorities have also arranged for buses to take tourists to ferry terminals.

The volcano is about 70km from the popular tourist areas of Kuta and Seminyak.

The disaster agency said in a separate statement (in Indonesian) that as of Tuesday morning, the volcano was still emitting thick ash clouds and that "rays of flares from the glowing lava" were also observed overnight.

Besides ash, streams of rock mixed with water known as lahar have also been spotted flowing down from the mountain. Officials have warned people to stay away from them.

Officials have told everyone living in a 10km exclusion zone around the volcano to evacuate.

Mr Sutopo said that officials faced difficulties estimating the exact number of evacuees given varying population data, but they believe between 90,000 and 100,000 people needed to leave.

So far, only 29,000 people had moved to shelters, while others have fled to other places like Lombok, he said.

Still, there were "many people" who have remained, as some still feel safe while others are unwilling to leave their cattle and fields, he said.

Authorities have warned that they may forcibly evacuate people if they do not move to shelters soon.

Inside the exclusion zone

A large banner reads: "You're entering active volcanic hazard zone." But looking around, you wouldn't know.

Just behind the sign Seriyani is selling flowers for offers to the Balinese Hindu gods. She says she is worried, but needs to stay here and work to feed the family.

"When it really erupts I will run," she says with a nervous laugh.

Further in the exclusion zone we find a school open. Here the teacher is showing the children how to put on simple surgical masks. To protect them from the ash, the headmaster tells me.

The volcano has been rumbling for weeks now he says so they don't want to move yet and be left in limbo.

Authorities say they will force people to evacuate. But those still on the mountain haven't heard that.