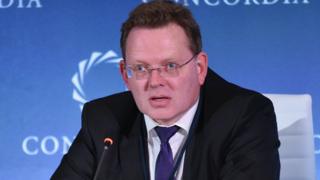 A mayor in western Germany has survived a knife attack amid suspicions of a link to his liberal immigration policy.

Andreas Hollstein, conservative mayor of Altena, was stabbed in the neck in a kebab shop and had hospital treatment.

The town in North Rhine-Westphalia (NRW) is well known for having accepted more than its quota of migrants.

"The security authorities believe that there was a political motive," said NRW premier Armin Laschet. The mayor is in Chancellor Angela Merkel's CDU party.

Witnesses quoted by German media said the assailant – now in custody – shouted criticism of the mayor's asylum policy during the attack on Monday night.

In a tweet, Mrs Merkel condemned the attack (in German). "I am outraged by the knife attack on Mayor Andreas Hollstein, and very relieved that he is able to be back with his family. Thanks also to those who helped him," she said.

The poor performance of her Christian Democrats in the September general election has been attributed largely to criticism of her liberal immigration policy, summed up by her motto "we can manage".

She accepted more than a million asylum seekers – many of them Muslims – during Europe's 2015-2016 migrant crisis.

Read more on the immigration issue in Germany:

Is Germany's migrant crisis over?

Altena – with about 17,000 residents – won a national award in May for integrating migrants. The town strives to house migrants in normal apartment blocks, rather than in migrant hostels, German ARD news reports.

Mr Hollstein, 57, told a news conference on Tuesday that the kebab shop owner – Demir Abdullah – and his son had overpowered the knifeman.

He thanked them and Mr Abdullah's wife, who had called the police. "I'm sure that if they hadn't reacted like that I wouldn't be alive now," he said, wearing a big plaster on his neck.

The 56-year-old attacker was reportedly drunk and used a 30cm-long (1ft) knife.

German Justice Minister Heiko Maas tweeted (in German): "We must never accept attacks on people who are just helping others. Our country must not tolerate hatred and violence."

The attack has reminded Germans of the stabbing of another CDU politician, Henriette Reker, in 2015.

Ms Reker was elected mayor of Cologne in October 2015. While campaigning she had been stabbed by a man claiming to be angry over the CDU's refugee policy.

For the first time in a federal election the far-right Alternative for Germany (AfD) polled strongly enough in September to enter the German parliament, winning 94 seats. It campaigns against what it calls the "Islamisation" of Germany, denouncing the CDU's asylum policy.