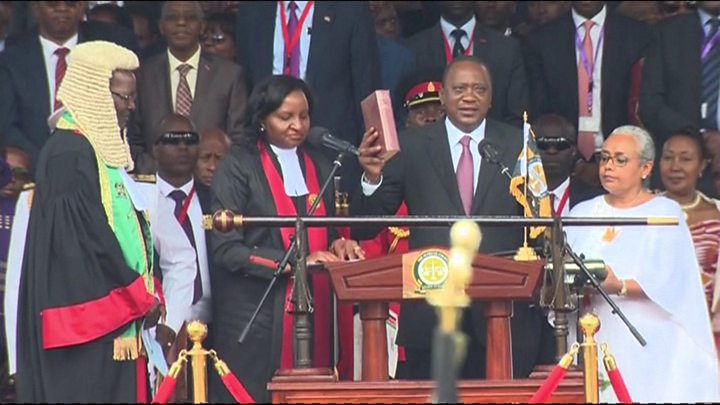 Uhuru Kenyatta has vowed to overcome Kenya's divisions after being sworn in for a second term as president, at a ceremony boycotted by the opposition.

Speaking after his inauguration in the capital Nairobi, he said he would try to incorporate some of the opposition's ideas "in the spirit of inclusivity".

Two people died when police clashed with opposition supporters in the city.

Opposition leader Raila Odinga announced plans to be sworn in himself as president next month.

He boycotted last month's repeat election and has not recognised Mr Kenyatta's victory.

The original election on 8 August was held again after being annulled by the Supreme Court on grounds of irregularities.

What did Kenyatta say exactly?

Embarking on his second and last term in office, he promised to act as "the custodian of the dreams of all" Kenyans.

Without specifying whether he would reach out to Mr Odinga, he said: "We may have chosen different candidates and different visions, but each one of us voted for a better life.

"To my competitors, and in the spirit of inclusivity, I will endeavour to incorporate some of their ideas. The election was not a contest between a good dream and a bad dream. It was a contest between two competing visions.

"I will devote my time and energy to build bridges, to unite and bring prosperity to all Kenyans."

How did the inauguration unfold?

Spectators inside Nairobi's Kasarani sports stadium were entertained by music and dance performances, while the military paraded.

However, there were scenes of chaos outside when people without seats tried to rush in and were driven back by police with tear gas and batons, with some officers on horseback.

Ethiopian Prime Minister Hailemariam Desalegn and Rwandan President Paul Kagame were among a number of African leaders at the inauguration.

Israeli Prime Minister Benjamin Netanyahu was also expected in Nairobi but for a later event in the presidential palace, the Jerusalem Post reports.

Why was the election re-run?

There were confrontations between police and opposition supporters in the suburb of Doonholm.

Angry protesters lit tyres, barricaded roads and threw stones at the police and some ruling party supporters. "No Raila, no peace," they shouted as police lobbed tear gas canisters to disperse them.

"We do not recognise Uhuru Kenyatta," one protester holding a sling loaded with a stone told me. Another protester said he was angry that the police had blocked access to the venue where the opposition had planned to hold a rally.

Mr Odinga told the BBC that they wanted to mourn the death of their supporters who were allegedly killed by police over the past week-and-a-half. The police have denied shooting and killing any opposition supporters.

Addressing his supporters on a road in Nairobi, Mr Odinga said he himself would be sworn in as president on 12 December.

According to Mr Odinga, Mr Kenyatta was elected by "just a small section of the country".

Local media and police sources reported the deaths of two people, at least one of whom was shot as police battled protesters with tear gas and batons.

Opposition activists had been trying to hold a rally in the city's Jacaranda grounds, far away from the stadium, to commemorate 50 or so people killed since the August vote.

A woman said Mr Kenyatta had not won fairly. "So we feel that it's not time to move on," she said. "It will not be an easy thing to do."