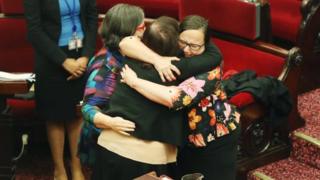 The Australian state of Victoria has become the nation's first to legalise assisted dying.

The landmark legislation was approved after more than 100 hours of gruelling debate – including two all-night sittings.

The law means terminally ill patients in Australia's second-most populous state will have the right to request a lethal drug from mid-2019.

They must be aged at least 18 and have less than six months to live.

"I'm proud today that we have put compassion right at the centre of our parliamentary and our political process," said state Premier Daniel Andrews.

"That is politics at its best and it is Victoria doing what it does best – leading our nation."

The law is designed for patients who are in severe pain. It has 68 safeguards, including:

Additionally, patients must have lived in Victoria for at least 12 months and be of sound mind.

Patients with some conditions – such as multiple sclerosis and ALS, also known as motor neurone disease (MND) – will become eligible when they have 12 months to live.

The legislative debate included one sitting that lasted for 26 hours, and another that stretched for 28 hours. The bill was finally ratified with amendments on Wednesday.

It was fiercely opposed by some lawmakers, who had attempted to add hundreds of amendments.

Last month, Mr Andrews's own deputy, James Merlino, spoke strongly against what he called a "deeply flawed" bill that was "a recipe for elder abuse".

Laws allowing terminally ill patients to legally end their lives with a doctor's supervision have been passed in countries including Canada, the Netherlands and Belgium.

IcetruckNovember 29, 2017
Like story:
tweet
Canada PM apologizes for oppression of LGBTQ communities
‘This Is Us’ Star Sterling K. Brown Opens Up About Racial Identity and Adoption