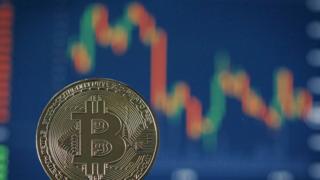 The virtual currency reached the benchmark for the first time, just days after it passed $9,000.

It caps a remarkable rise in value for the crypto-currency, which was trading below $1,000 at the start of the year.

Some experts believe the asset still has far to soar, but others say it represents a speculative bubble with nothing tangible at its core that could burst any time.

The total value of all the bitcoins in existence has now surpassed $167bn.

Bitcoin first reached $1,000 in late-2013 and then dipped significantly before starting a volatile climb to its current value.

It is not entirely clear what has driven the sudden rise in value, especially because the past few weeks have been marked by action by some financial regulators to limit its use.

One factor that may have helped was the US-based derivatives marketplace operator CME Group's announcement at the start of the month that it planned to launch a Bitcoin futures product before the end of 2017, which bolstered confidence in its prospects.

Another was a decision to drop a controversial plan known as Segwit2x.

This would have altered the way Bitcoin's underlying technology, the blockchain, worked, to help it handle more transactions.

But the move risked splitting the community.

Many industry watchers believe the rapid rise in value will not be sustained and expect its value to suddenly fall sharply.

Bitcoins were first produced in 2009 and took a long time to become an accepted holder of monetary value that could be swapped for real-world cash.

The boom has led to a general rise in many other virtual currencies.

Many others are also trying to profit from the growing interest in crypto-currencies.

Many malware writers are now seeking to install software on vulnerable websites that create or "mine" the coins.

In addition, scammers have sent fake text messages to people's phones, claiming they own some of the digital currency, in an effort to tempt them into opening a dangerous link.