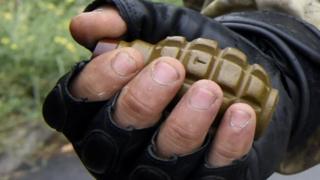 A man has set off two hand grenades in a courtroom in eastern Ukraine, killing himself and injuring at least seven others, local media report.

The explosions occurred during a murder hearing in Nikopol, in the Dnipropetrovsk region, the Ukrayinsk Pravda news website said.

The man is believed to be the father of one of the murder victims at the centre of the trial.

Three defendants were among those injured.

Four court employees and guards also sustained injuries. One report suggests the total number of injured is 10, and that two of those are being operated on in hospital.

The defendants are accused of firing on a car and killing two passengers in February 2016 – one them, the man's son, said Ukrayinsk Pravda.

"According to preliminary reports, a man pulled out two hand grenades and detonated them at 11:20 (09:20 GMT) during a murder case hearing," the newspaper quoted police spokesperson Yaroslav Trakalo as saying.

The man threw the grenades when he heard the hearing was being adjourned and the defendants were being handcuffed, said the Zerkalo Nedeli news website.

It said investigators were on the scene.

The conflict in eastern Ukraine means weapons are readily available among the population.

Some 10,000 people have died in the conflict, which erupted in April 2014 soon after Russia annexed Ukraine's Crimea peninsula.