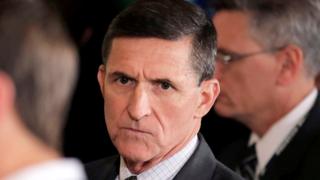 President Donald Trump's ex-national security adviser, Michael Flynn, has been charged with making a false statement to the FBI in January.

Mr Flynn was forced to resign the following month after misleading the White House about meeting the Russian ambassador before Mr Trump took office.

The charges were brought by Special Counsel Robert Mueller, as part of his investigation into alleged Russian meddling in the 2016 US election.

He was expected to plead guilty to one count of knowingly making "false, fictitious and fraudulent statements", reports said. Ahead of Friday morning's court session in Washington DC, two officials were quoted by Reuters news agency as saying he had turned himself in to the FBI.

The former aide is the most senior member of the Trump administration so far to have been indicted by the Mueller investigation.

In October, Mr Trump's former presidential campaign manager, Paul Manafort, was accused of conspiring to defraud the US in his dealings with Ukraine. It also emerged that another ex-aide, George Papadopoulos, had pleaded guilty to making false statements to FBI agents.

Just over a week ago, US media said his legal team had told the president's lawyers they could no longer discuss the case, prompting suggestions that he had begun co-operating with prosecutors. If confirmed, that would indicate Mr Flynn's lawyers have reached a plea bargain.

According to the charges faced by Michael Flynn, he is accused of:

Mr Flynn lost his role as national security adviser after it emerged he had misled Vice President Mike Pence over his meetings with the then Russian ambassador.

IcetruckDecember 1, 2017
Like story:
tweet
Turkey seeks arrest of ex-CIA officer Fuller over coup plot
Seth Meyers Takes Aim at Matt Lauer: “You Killed Your Career and You F—ed Yourself”