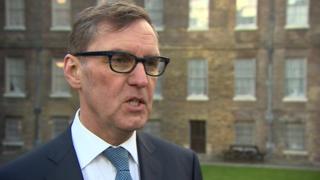 Social mobility board quits over lack of progress

All four members of the board of the government's Social Mobility Commission have stood down in protest at the lack of progress towards a "fairer Britain".

Ex-Labour minister Alan Milburn, who chairs the commission, said he had "little hope" the current government could make the "necessary" progress.

Tory former cabinet minister Baroness Shephard is among three others to quit.

The government said it was making "good progress" on social mobility and focusing on disadvantaged areas.

It added Mr Milburn had been informed a new chairperson was to be appointed and an open application process would be held.

In his resignation letter to Theresa May, first reported by the Observer, Mr Milburn said ministers were preoccupied with Brexit.

Mr Milburn said it has "become obvious that the government as a whole is unable to commit the same level of support" to social mobility as individual ministers such as the education secretary.

He added: "I do not doubt your personal belief in social justice, but I see little evidence of that being translated into meaningful action."

Mr Milburn took up his role with the commission – an independent body which monitors progress towards improving social mobility in the UK, and promotes social mobility in England – in July 2012. He said he understood the government had intended to start looking for a new chairperson next year.

The other board members standing down are Paul Gregg, a professor of economic and social policy at the University of Bath, and David Johnston, the chief executive of the Social Mobility Foundation charity. Gillian Shephard is a former Tory education secretary and was deputy chair of the commission.

In his resignation letter, Mr Milburn said he was standing down with "much sadness" and was "deeply proud of the work the commission has done".

He said: "All the main political parties now espouse a Britain that is less elitist and more equal, while growing numbers of employers, universities, colleges, schools and councils have developed a shared determination to create a level playing field of opportunity in our country."

But Mr Milburn said the government seemed "unable to commit to the future of the commission as an independent body or to give due priority to the social mobility challenge facing our nation".

"It is understandably focused on Brexit and does not seem to have the necessary bandwidth to ensure that the rhetoric of healing social division is matched with the reality," he added.

Mr Milburn also said that it was "disappointing" that appointments to key commission roles had been left vacant for almost two years.

In a report published last week, the commission said economic, social and local divisions laid bare by the Brexit vote needed to be addressed to prevent a rise in far right or hard left extremism.

The commission added that London and its commuter belt appeared to be a "different country" to coastal, rural and former industrial areas as young people there faced lower pay and fewer top jobs.

Mr Milburn told the Observer: "The worst position in politics is to set out a proposition that you're going to heal social divisions and then do nothing about it….

"In America for 30 years real average earnings have remained flat. Now here the Chancellor is predicting that will last for 20 years.

"That has a consequence for people, but a political consequence as well. It means more anger, more resentment and creates a breeding ground for populism."

The resignations come as Mrs May, who entered Downing Street in July 2016 promising to tackle the "burning injustices" that hold back poorer people, faces questions over the future of senior minister Damian Green – who is effectively her second in command – and is under pressure as Brexit talks continue.

In an interview in the Sunday Times, Mr Milburn, a former health secretary, said: "There has been indecision, dysfunctionality and a lack of leadership."

Downing Street said the government was committed to fighting injustice "and ensuring everyone has the opportunity to go as far as their talents will take them".

It highlighted its increase of the national living wage, cuts in income tax for the lowest paid and doubling of free childcare in England.

The process of appointing a new chairperson and commissioners would begin as soon as possible, it added.

"As inequality has grown under the Tories, social mobility has totally stalled," he said. "How well people do in life is still based on class background rather than on talent or effort."