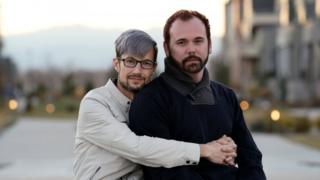 The US Supreme Court hears arguments on Tuesday in the case of a gay couple turned away by a Colorado bakery as they tried to buy a wedding cake.

In 2012, baker Jack Phillips refused to make David Mullins and Charlie Craig such a cake, saying it was against his Christian belief.

The baker says this violates his rights to religious freedom and free speech.

How did the case come around?

In July 2012, Mr Mullins and Mr Craig went to Mr Phillips's Masterpiece Cakeshop in Lakewood, near Denver, to order a cake for a party to celebrate their planned marriage in Massachusetts later that year.

But Mr Phillips refused, saying it was his "standard business practice not to provide cakes for same-sex weddings".

Instead, he offered them other products, including birthday cakes and biscuits.

The couple later filed a successful complaint with the Colorado Civil Rights Commission.

Colorado bans businesses from discriminating against customers based on race and sexual orientation.

In 2015, Colorado's appeals court upheld the decision, with the state's supreme court later denying review of the case.

What are the baker's arguments?

Mr Phillips then decided to take the case – known as Masterpiece Cakeshop v Colorado Civil Rights Commission – to the US Supreme Court.

He argues that his cakes are artistic endeavours, and therefore guarantees of freedom of speech and expression in the US Constitution protect him from being forced to make creations that express a message he opposes.

His lawyers also say that he did not violate public accommodation laws that ban discrimination because he did not throw the gay couple out of the shop outright and refuse to serve them.

What ramifications could this have?

A verdict in favour of Mr Phillips could open the door for a number of businesses to refuse certain services to gay couples by invoking religious beliefs.

Legal experts say that businesses could use the case to say they have a similar right to turn way, for instance, interracial couples if this clashes with their religious beliefs.

IcetruckDecember 5, 2017
Like story:
tweet
Train fares will go up by 3.4% in January
Australia unveils laws to prevent foreign interference