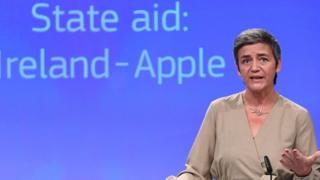 Ireland is to comply with a European Commission order to collect a disputed €13bn tax bill from the US firm Apple.

The money is now being paid into a blocked separate account, while Ireland appeals the Commission's decision.

The Commission ruled last year that Ireland had given Apple illegal state aid by allowing it to pay an effective 1% corporation tax.

Ireland was referred to the European Court of Justice after it failed to implement an order to collect the tax.

The Irish government says it profoundly disagrees with the Commission's analysis of the case.

The Irish Finance Ministry said in a statement: "These sums will be placed into an escrow fund with the proceeds being released only when there has been a final determination in the European Courts over the validity of the Commission's Decision."

Ireland has lodged an application in the General Court of the European Union for the Commission's decision to be annulled.

Meanwhile Apple is also challenging the Commission's ruling. Its CEO Tim Cook has called it "maddening".

An Apple spokesperson said the company was confident the General Court would overturn the Commission's decision: "The Commission's case against Ireland has never been about how much Apple pays in taxes, it's about which government gets the money.

"The United States government and the Irish government both agree we've paid our taxes according to the law."

Why doesn't Ireland want the money?

The case comes out of a two-year investigation by the EU's competition chief Margrethe Vestager into so-called sweetheart tax deals in 1991 and 2007. In 2016 she said the Commission had found Apple guilty of receiving illegal state aid.

The sum now being collected is roughly equivalent to the cost of Ireland's entire national health budget.

Ireland's reluctance to collect the taxes from Apple is partly because it believes it may damage its reputation as an investment destination which has attracted multi-national companies such as Apple, Intel and Pfizer.

Ireland's corporate tax rate of 12.5% is among the lowest in Europe and it believes this is crucial to that reputation.

But the European Commission believes that for Apple the tax rate was much, much lower.

The Commissions's investigation concluded that Apple had effectively paid 1% tax on its European profits in 2003 and down to about 0.005% in 2014.

At the time, Ms Vestager said that Ireland had given Apple "selective treatment" enabling it to "pay substantially less tax than other businesses over many years."

Another reason for Ireland's refusal to accept the Commission ruling is that all the funds may not necessarily end up in Irish government coffers.

The Commission has said that other countries could claim part of the tax if they believe that sales (and other activities) "could have been recorded in their jurisdictions."

And it added that Ireland's tax take could be reduced if the US forces Apple to pay more back to the parent company.

This leaves Ireland at the centre of an uncertain tax situation on both sides of the Atlantic.