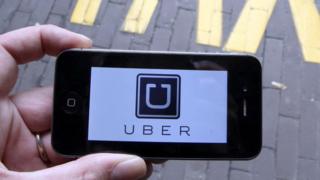 Japanese giant Softbank is set to take a large stake in Uber, expanding its holdings in transportation companies around the world.

Softbank led a consortium that reportedly agreed to invest at least $8bn for a roughly 15% stake in the San Francisco-based ride-hailing company.

The group will buy most of the shares from early investors in a deal that values Uber at about $48bn (£35.7bn).

Uber said the investment would fuel its expansion and technology investments.

The deal, which includes additional investment, is expected to be closed in early 2018.

Uber said: "We look forward to working with the purchasers to close the overall transaction, which we expect to support our technology investments, fuel our growth and strengthen our corporate governance."

As part of the deal, Uber's board will expand from 11 to 17 directors, with Softbank's investor group taking two of the new seats.

The shake-up was supported by Uber's new chief executive Dara Khosrowshahi, who has said he hopes to list Uber's shares publicly in 2019.

The change is expected to reduce the influence of former chief executive Travis Kalanick, who was ousted from the top role in June but remains a board member.

The moves come as Uber concludes a difficult year, in which it faced a sexual harassment scandal, investigations by regulators and a lawsuit over allegedly stolen technology, among other challenges. It also continues to experience steep losses.

Details of the investment

Softbank has made a series of high-profile tech investments and shown an appetite for investments in ride-sharing, backing China's Didi Chuxing and Southeast Asian taxi-hailing app Grab, among other companies.

The Uber transaction, which was months in the making, comes in two parts.

The Softbank-led consortium aimed to buy at least 14% through an offer to buy shares from employees and early investors. The tender offer period concluded on Thursday.

The price offered for the shares valued the firm at $48bn and was a discount to Uber's most recent fundraising round, but for some of the firm's earliest investors could provide a big payoff.

The investor group is also buying about $1.25bn worth of new shares at a price that values the firm at almost $70bn, a significantly higher price that is similar to what Uber shares fetched in its last fundraising round.