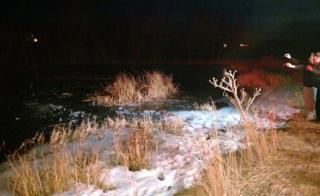 US officer plunges into frozen pond to rescue boy

A US police officer has told how he broke through the ice on a frozen pond and jumped in to rescue an eight-year-old boy on Christmas Day.

Sgt Aaron Thompson was called to the pond in New Harmony, Utah, after reports that the child had fallen in while chasing his dog.

He told a news conference he had found the boy floating beneath the surface about 25ft (7m) from the pond's edge.

He said he believed the boy had been in the water for about 30 minutes.

The Washington County Sheriff's Office said in a statement on Wednesday that the boy – named only as Jason – was awake in hospital and recovering.

His father has described the rescue as "a Christmas miracle", it added.

Sgt Thompson told reporters that when he arrived at the pond in the late afternoon he was directed to an area where a woman had seen the boy's hand protruding from the ice some minutes earlier.

He said that as he walked further out "the ice got thicker and I couldn't break it with my arms and my fists".

"So I started to jump up and down on it, putting my weight on it, and then pound on it to get it to break," he said.

He said that he dived down to the bottom to gauge how deep and how cold the water was and then began to search.

"On my tippytoes, floating in the water up to my neck… moving my arms up and down I knew eventually I was going to bump into him and that is exactly what happened," he said.

"Once I saw his face I pulled his head up above the water and called out to the paramedics."

Sgt Thompson was treated for hypothermia and cuts and bruises but later returned to work.

Although hailed as a hero by his colleagues and the community, he said he wanted to share any credit with other members of the emergency services, the Spectrum newspaper of nearby St George reported.