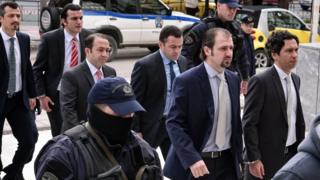 The Greek government says it has asked the country's judicial authorities to cancel a legal decision granting asylum to a Turkish helicopter pilot.

He was one of eight servicemen who fled to Greece last year after a failed coup attempt in Turkey.

Turkey has expressed its fury at the asylum decision, saying it would affect ties between the two countries.

The foreign ministry in Ankara said Greece had once again showed that it protects and embraces coup plotters.

A Greek asylum committee ruled that there was no evidence that the co-pilot who flew seven fellow servicemen to Greece the day after the failed coup was involved in the plot.

It said he could not expect a fair trial in Turkey.

The other seven Turkish soldiers are in custody in Greece awaiting a decision on their asylum requests.

In January the Greek supreme court turned down a Turkish extradition request for the eight servicemen, who say they were not involved in the attempted coup.

Greece's administrative court of appeal is to examine the case following the government's request.

The Greek government has said that it does not support coup plotters and that its judiciary is independent.

The soldier who was granted asylum is to be freed from custody, a police official told Reuters.

Turkey's Foreign Minister Mevlut Cavusoglu visited Greece earlier this month and said that he did not want the country to become a haven for coup plotters.

Nearly 250 people died and 2,196 were wounded fighting the coup attempt by an army faction on 15 July last year.

The government has since led a crackdown on alleged coup supporters, with the dismissal of more than 150,000 state employees and the arrest of some 50,000 people.