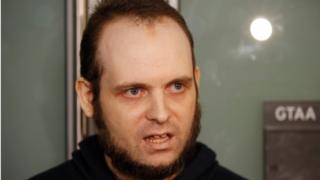 A Canadian man who was held hostage for five years by a Taliban-linked insurgent group has been arrested.

Joshua Boyle, 34, is facing a total of 15 charges including assault and unlawful confinement, according to Canadian media.

Pakistani soldiers rescued Mr Boyle, his US wife, Caitlan Coleman, and their children in October.

The couple were kidnapped in Afghanistan in 2012 and had three children while in captivity.

The charges were filed on 1 January.

"Mr Boyle is presumed innocent," his lawyer Eric Granger said in an email to the BBC.

"He's never been in trouble before. No evidence has been provided yet, which is typical at this early stage. We look forward to receiving the evidence and defending him against these charges."

There is a publication ban on any information that would identify any alleged victim or witness.

The couple were kidnapped while backpacking in Afghanistan in 2012 by the Taliban-aligned Haqqani network.

After their release, Mr Boyle told the media that their captors had killed a fourth child and said they had raped his wife.

The couple have been living in Canada since their rescue.

In December, the family met Canadian Prime Minister Justin Trudeau and images of the meeting were shared on the Boyle's Twitter account.

Mr Boyle is scheduled to appear in court 3 January.