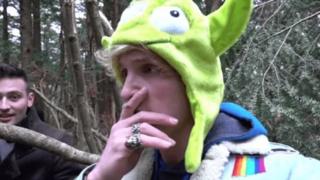 The video showed Logan Paul and friends at the Aokigahara forest at the base of Mount Fuji, known to be a frequent site of suicides.

Going in to film the "haunted" forest, they come across a man's body and are shocked, but also make jokes.

Logan Paul, who has more than 15 million subscribers on YouTube, has since posted an apology on Twitter, saying he had been "misguided by shock and awe".

Data on the number of suicides there each year is not made public, to avoid publicising the site. Signs are posted in the forest urging people to seek medical help rather than take their own lives.

A member of the group is heard off camera saying he "doesn't feel good". Mr Paul then asks him: "What, you never stand next to a dead guy?" He then laughs.

Why does Japan have such a high suicide rate?

Dear @LoganPaul,
When my brother found my sister’s body, he screamed with horror & confusion & grief & tried to save her. That body was a person someone loved.
You do not walk into a suicide forest with a camera and claim mental health awareness.

Some supporters insisted he should be forgiven for what they said was a mistake, with one tweeting: "You still are the best out there and always will be" with the hashtag #Logan_you_are_forgiven.

In his apology, posted on his Twitter page, Mr Paul, of Westlake, Ohio, said: "I'm surrounded by good people and believe I make good decisions, but I'm still a human being. I can be wrong."

Mr Paul says in the video that he is not making money off the content. YouTube, which pays content providers for videos that garner above a certain number of hits, did not immediately respond to the BBC's request for comment.