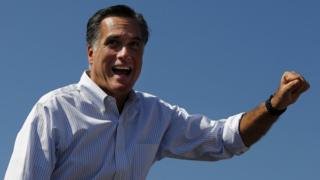 Former Republican presidential nominee Mitt Romney, a vocal critic of President Donald Trump, could be poised for a political comeback.

Utah Senator Orrin Hatch has announced he will resign, and Mr Romney has reportedly been telling associates he hopes to run for the seat.

If he does declare his candidacy, Mr Romney would be widely viewed as all but a shoo-in to snatch the seat in his home state, which is heavily populated by his fellow Mormons.

He was not a candidate for political office last year when he pilloried Mr Trump.

''His promises are as worthless as a degree from Trump University,'' said Mr Romney.

Mr Trump hit back, calling Mr Romney a "failed candidate" who "choked like a dog" in the 2012 race.

A clear path in Utah

When news broke that Orrin Hatch will not run for re-election, social media erupted with photos of a steely-eyed Mitt Romney on a horse, set against a stormy sky. The path had cleared for the 2012 Republican presidential nominee and saviour of the 2002 Salt Lake City Olympics to return to the public stage.

A more fitting photograph to consider, however, is from November 2016, when Mr Romney dined with Donald Trump at a posh Manhattan restaurant. The then-president-elect grinned like the Cheshire cat, while Mr Romney awkwardly turned to the camera, brow furrowed in seeming discomfort.

The former governor was in the running to be secretary of state for a man he had months earlier called a fraud, and while the hatchet may have been buried, it was not likely forgotten.

Mr Romney didn't get the job – numerous Trump supporters rejected him – but now the Republican elder statesman has another chance at power. Will he speak out against the president, as he once did? Would it translate into action, not just rhetoric similar to other apostate Senate Republicans?

Mr Romney has been quiet about his plans and views of late. When he finds his voice, people will listen.

He served as a chairman on his son's investment firm and on the board of directors of Marriott International.

But he maintained his connection to the Republican party.

The president has urged Mr Hatch, who is seen as a Trump loyalist, to run again for another six-year term.

Last month in Utah, Mr Trump called Mr Hatch "a true fighter" and said he hoped he would continue to serve "in the Senate for a very long time to come".

But the Utah senator, a Mormon, said in a video on Tuesday that he would step down at the end of the year.

"Every good fighter knows when to hang up the gloves," said 83-year-old Mr Hatch. "And for me, that time is soon approaching."

The longest-serving Senate Republican with seven terms under his belt, he was first elected in 1976.

Merry Christmas from our family to you and your family. pic.twitter.com/kep6SnNysO

IcetruckJanuary 2, 2018
Like story:
tweet
Science Says: Why there’s a big chill in a warmer world
Peru Pasamayo: Many killed as coach plunges off cliff