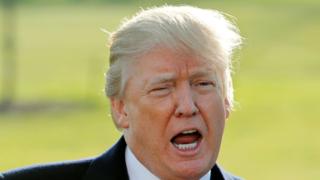 The US may stop aid payments to Palestinians who are "no longer willing to talk peace", President Trump said.

On Twitter, Mr Trump said the United States received "no appreciation or respect" in return for its aid.

He also said his controversial recognition of the contested city of Jerusalem as Israel's capital took the hugely divisive issue "off the table" for new peace talks.

Palestinians had said the move showed the US could not be a neutral broker.

Soon after Washington's decision was announced in December, Palestinian President Mahmoud Abbas said he would not accept any US peace plan for the Middle East.

The decision on Jerusalem was also overwhelmingly condemned at the United Nations, where 128 countries voted against Mr Trump's fulfilment of a campaign promise.

The US president was following up earlier comments about aid payments to Pakistan, in which he said the US had received only "lies and deceit" in exchange for billions of dollars in aid.

It's not only Pakistan that we pay billions of dollars to for nothing, but also many other countries, and others. As an example, we pay the Palestinians HUNDRED OF MILLIONS OF DOLLARS a year and get no appreciation or respect. They don’t even want to negotiate a long overdue…

…peace treaty with Israel. We have taken Jerusalem, the toughest part of the negotiation, off the table, but Israel, for that, would have had to pay more. But with the Palestinians no longer willing to talk peace, why should we make any of these massive future payments to them?

What have the Palestinians said to anger the US?

Jerusalem is one of the world's most contested sites.

Israel claims the whole of the city as its capital. The Palestinians want East Jerusalem, occupied by Israel in the 1967 Middle East war, to be the capital of a future Palestinian state.

Mr Trump, however, decided to formally recognise Jerusalem as Israel's capital, despite being warned it could cause unrest in the region.

He also said he would move the US embassy there from Tel Aviv, where all other nations have their consulates.

For the Palestinians, Mr Abbas said: "The United States has proven to be a dishonest mediator in the peace process."

He also called Jerusalem the "eternal capital of the state of Palestine".

How did the Palestinians respond to Mr Trump's threat to cut aid?

Angrily. A Twitter feed of the governing Palestine Liberation Organisation accused Mr Trump of sabotaging their "search for peace".

Palestinian rights are not for sale. By recognizing Occupied Jerusalem as Israel’s capital Donald Trump has not only violated of international law, but he has also singlehandedly destroyed the very foundations of peace and condoned Israel’s illegal annexation of the city.

We will not be blackmailed. President Trump has sabotaged our search for peace, freedom and justice. Now he dares to blame the Palestinians for the consequences of his own irresponsible actions!
End of the Statement #Palestine

What kind of aid does the US send to Palestinians?

Mr Trump's tweets followed remarks from Nikki Haley, the US envoy to the United Nations, in which she said the US would stop contributing to the UN's relief agency for Palestinian refugees.

The agency runs education, health, and social programmes. The United States is its largest governmental donor, handing over almost $370m (£270m) in 2016.

Speaking at a news conference, Ms Haley said: "The president has basically said that he doesn't want to give any additional funding, or stop funding, until the Palestinians are agreeing to come back to the negotiation table."

She said the UN's vote to condemn Mr Trump's Jerusalem decision was "not helpful to the situation".

"The Palestinians now have to show their will that they want to come to the table. As of now, they're not coming to the table but they asked for aid.

"We're not giving the aid, we're going to make sure that they come to the table," she said.

The withdrawal of aid is likely to have a significant impact on the UN agency's work, as the US contributes almost 30% of its overall funding.

In 2016, the second-largest donor, the European Union, donated less than half as much as the US.