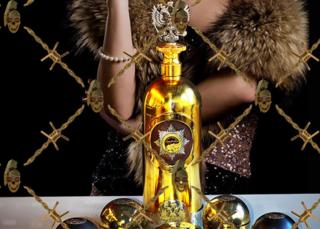 Danish police are investigating the theft of a bottle of vodka claimed to be the world's most expensive at $1.3m (£960,000).

The bottle, made from gold and silver and with a diamond encrusted cap, was on loan to a Copenhagen bar which had a collection of vodkas on display.

Bar owner Brian Ingberg said the bottle had featured in an episode of the political thriller House of Cards.

CCTV showed an intruder grab the Russo-Baltique vodka and flee the bar.

Police say it is not clear if the thief, who struck early on Tuesday, broke in or had a key.

Mr Ingberg, owner of the Cafe 33 bar, told broadcaster TV2 that he had borrowed the bottle from the Latvia-based Dartz Motor Company.

"It has been part of my collection for six months, but not any more," he said.

Russian luxury car maker Russo-Baltique is said to have created the vodka to commemorate the centenary of the company's factory.

The front of the bottle is decorated with leather and has a replica of the radiator guard used for Russo-Baltique cars.

The cap is shaped like a a Russian imperial eagle and is encrusted with diamonds.

Mr Ingberg said the bottle had featured in an episode of House of Cards as a gift from the Russian president to his US counterpart.

Dartz founder Leonard Yankelovich told the BBC he was hopeful he would get the bottle back.