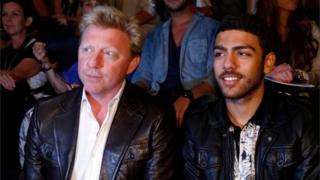 The son of German tennis champion Boris Becker is pressing charges against Jens Maier of the far-right Alternative for Germany (AfD) party, his lawyer says.

Noah Becker has an African-American grandfather on his mother's side.

Mr Maier has denied writing the tweet, which has since been deleted. He blamed one of his staff members.

The tweet was written in response to an interview Noah Becker gave in which he described Berlin as "a white city" compared to other European capitals, and said he had been attacked there because of his skin colour.

The artist and musician also discussed his experience growing up with a three-time Wimbledon champion as a father.

"It seems the little half-negro simply got too little attention – that's the only explanation for his behaviour," the message posted to Mr Maier's account on Tuesday said, in German.

Mr Maier is the parliamentary deputy for the AfD party, which received almost 13% of the vote and won over 90 seats in last year's election.

"I have been retained to quickly take the necessary steps under criminal and civil law against MP Jens Maier on the basis of this clearly racist tweet," Becker family lawyer Christian-Oliver Moser told Bild, a German newspaper.

He told the Associated Press news agency that charges were filed on behalf of Noah Becker on Thursday.

Two other members of Mr Maier's far-right political party are already being investigated over anti-Muslim messages they posted on New Year's Eve.

On 1 January, a new law came into force in Germany requiring social media companies to act quickly against hate speech. Platforms that don't may face fines of up to 50m euro (£44.3m).